This interactive presentation contains the latest oil & gas production data from all 17,997 horizontal wells in the Permian (Texas & New Mexico) that started producing since 2008/2009, through September. 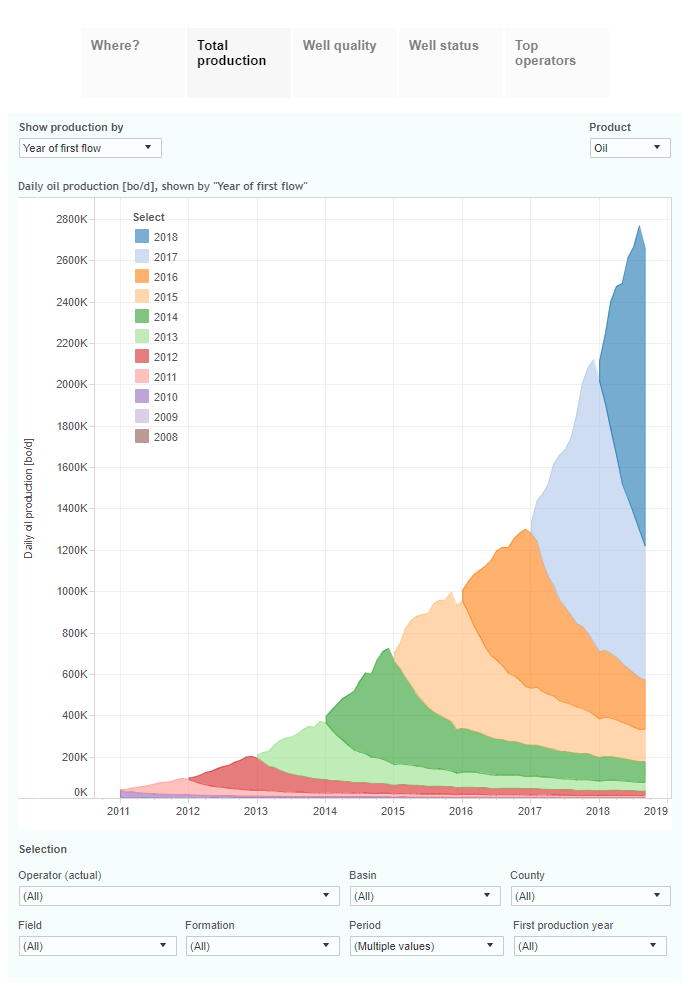 Last week I planned a post on the Permian, but noticed that September data for New Mexico was still quite incomplete (100 kbo/d, or ~20% of production has not yet been reported). Unfortunately, it still is, but I did not want to delay this update any further.

In New Mexico a single operator seems to be responsible for most of the missing production in September: EOG, which is also the largest producer in this state. After you exclude EOG from the graph (using the ‘Operator’ selection), you will see that the apparent drop in September has almost disappeared. 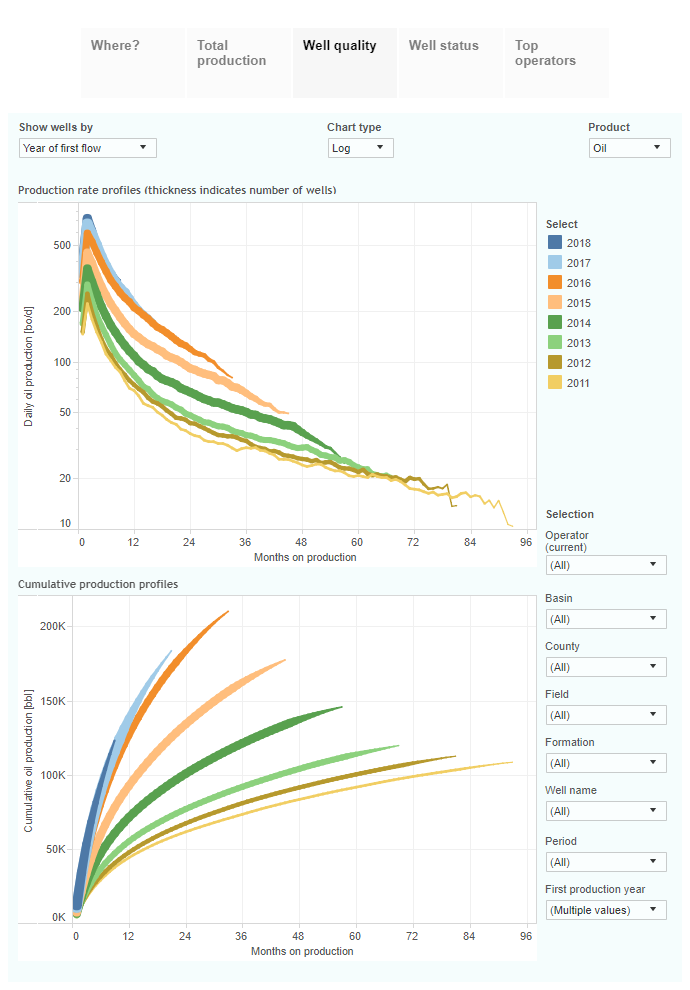 In the ‘Well quality’ tab you’ll find the production profiles for all these wells. By default they are grouped and averaged by the year in which they started production. With this setting, you’ll find in the bottom plot that well productivity improved significantly in the past 5 years. Wells that started in 2013 recovered 77 thousand barrels of oil in the first 2 years, on average, while this more than doubled to 183 thousand barrels of oil for wells that started 3 years later. 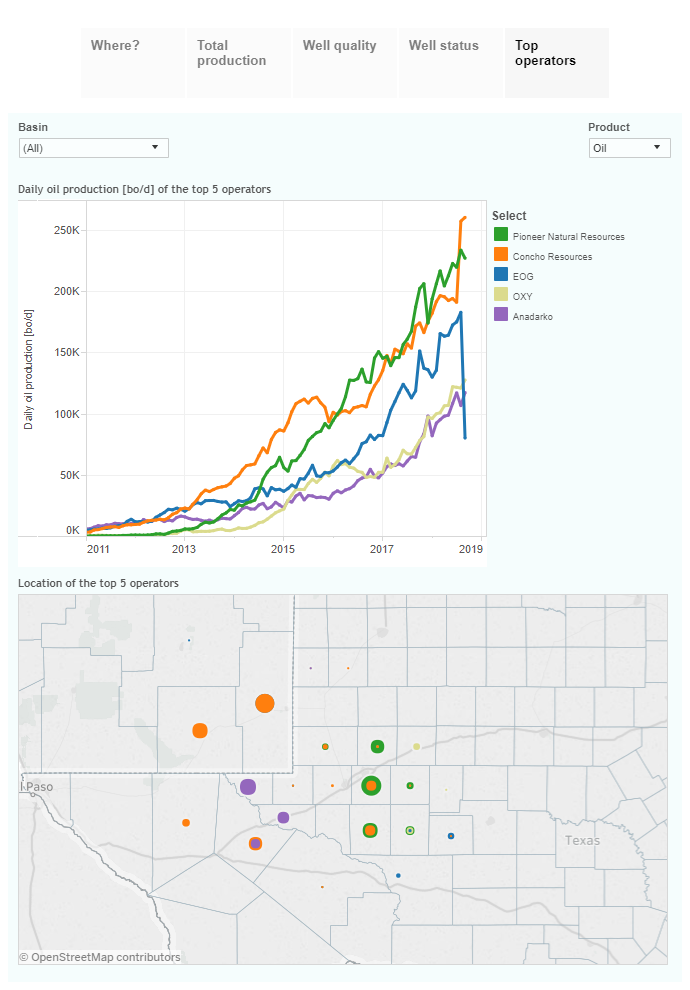 The final tab shows the performance of the leading operators. You’ll see the effects of the acquisition of RSP Permian by Concho, and the missing production for EOG in New Mexico in September. 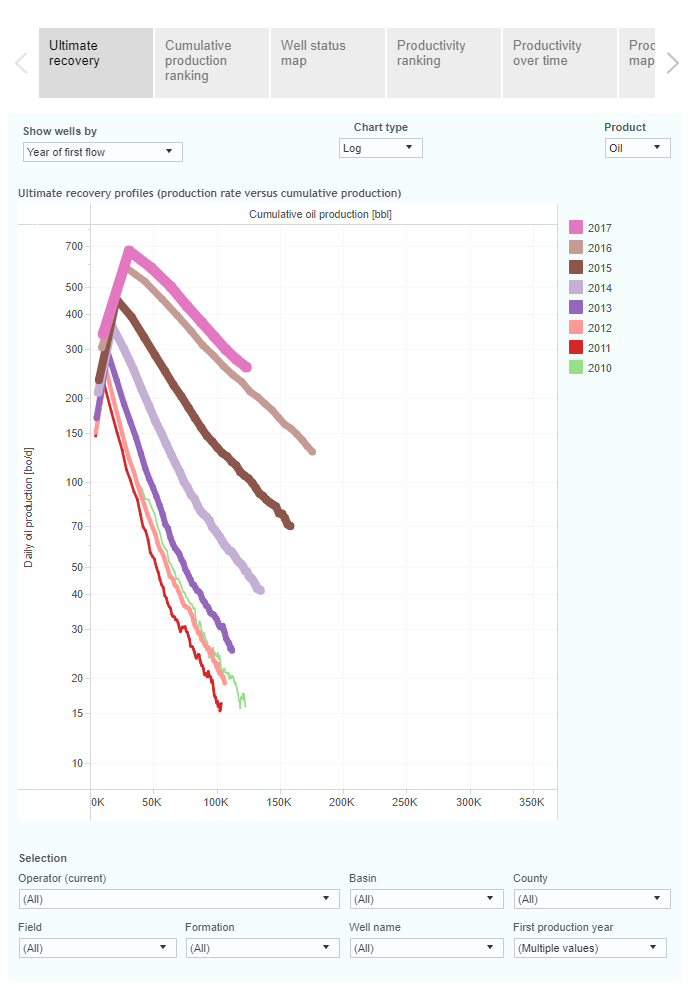 This “Ultimate recovery” overview shows the average production rate for these wells, plotted against their cumulative recovery. Wells are grouped by the year in which production started. This kind of plot doesn’t assume any kind of decline behavior, but a harmonic decline (b factor of 1), will show up as a straight line with the given settings.

The 2,215 horizontal wells that started in 2016 (light brown curve) are on track to recover each around 200 thousand barrels of oil, once they have declined to an average production rate of 100 bo/d. Newer wells appear to be on track to do slightly better than that.

Tomorrow we will have a new show at enelyst (live chat combined with images), where we will take a closer look at the latest Permian data. The show will be available here in the enelyst ShaleProfile Briefings channel. If you are not an enelyst member yet, you can sign up for free at enelyst.com.

Early next week we will have a post on all 10 covered states in the US.

Visit our blog to read the full post and use the interactive dashboards to gain more insight http://bit.ly/2LUFMoY