This interactive presentation contains the latest oil & gas production data from 97,332 horizontal wells in 10 US states, through September 2018. Cumulative oil and gas production from these wells reached 9.7 Gbo and 106 Tcf. West Virginia is deselected in most dashboards, as it has a greater reporting lag. September production data for New Mexico is rather incomplete, with over 100 thousand bo/d still missing. 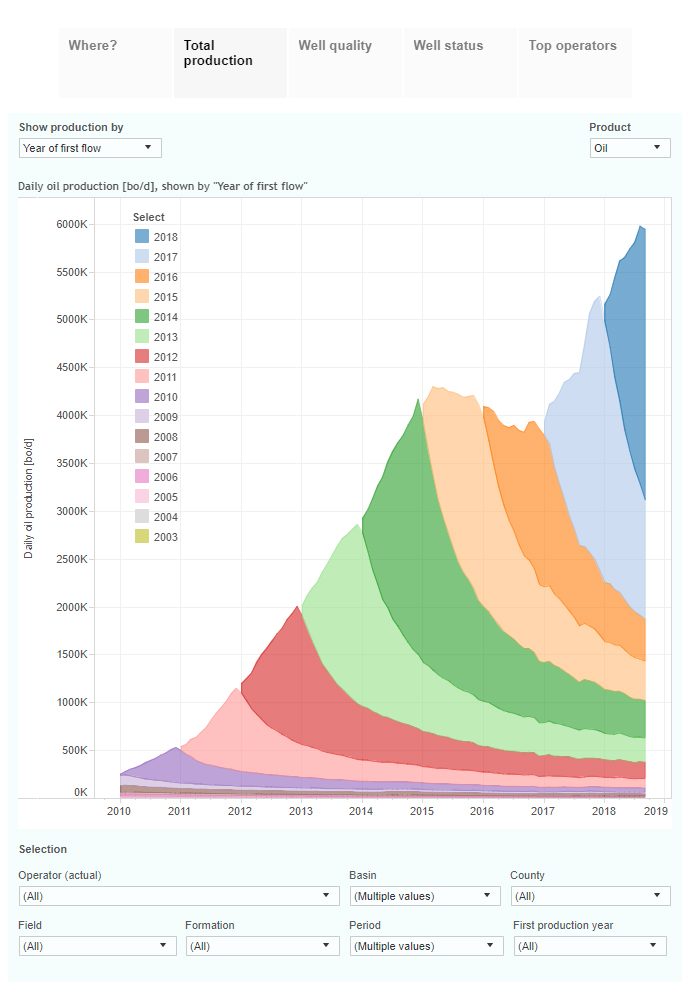 After all revisions are in, oil production from these horizontal wells should come in well above 6 million bo/d for September. The ~8,000 wells that started in the first 9 months of 2018 will then already have contributed ~3 million bo/d in September. Never before in the history of US shale was so much new production capacity added in 9 months. As the total decline of older wells (<2018) was over 2 million bo/d (as shown by the top of the light blue area) in this period, the actual growth rate was a little below 1 million bo/d.

If you switch to natural gas (using the ‘Product’ selection), you’ll see that gas production from the same wells never really experienced a drop, and grew by ~15 Bcf/d in the past 2 years to 55 Bcf/d (excluding WV) in September. 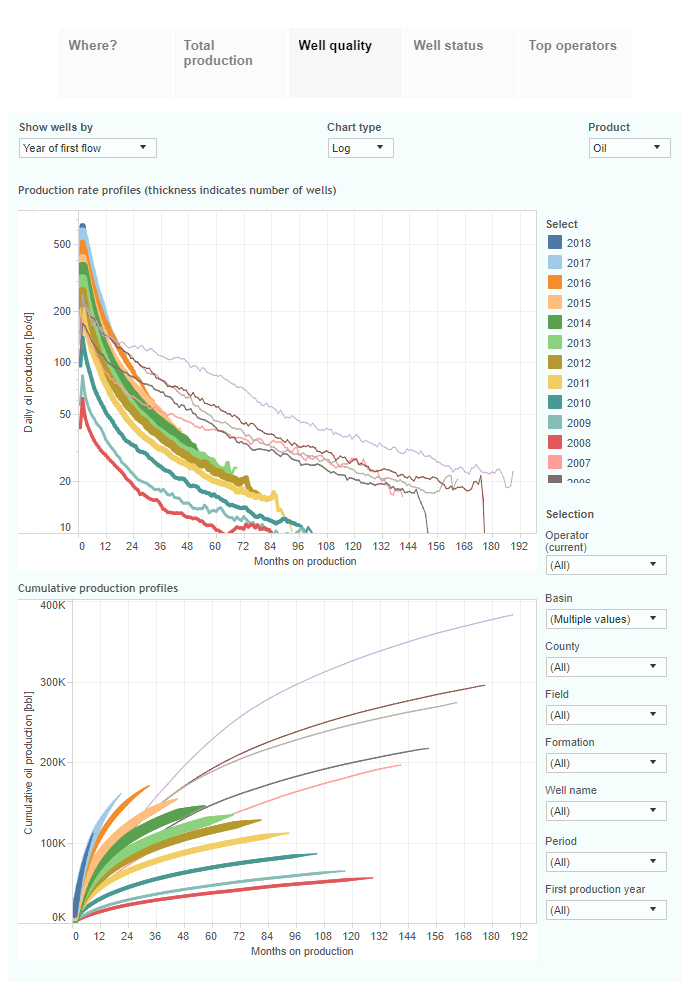 Initial well productivity grew steadily over the past 10 years (‘Well quality’ tab), but the rate of improvements appears to have slowed down recently. 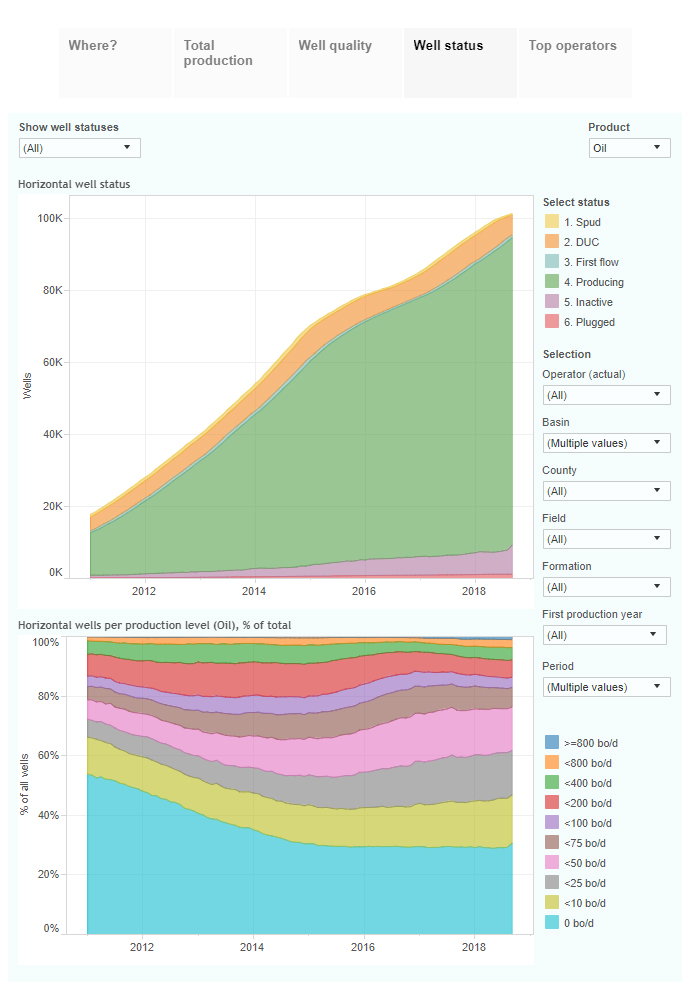 You’ll find the status of the more than 100,000 horizontal wells that have been drilled in the ‘Well status’ tab. Only 1% of these wells have been plugged and abandoned so far. 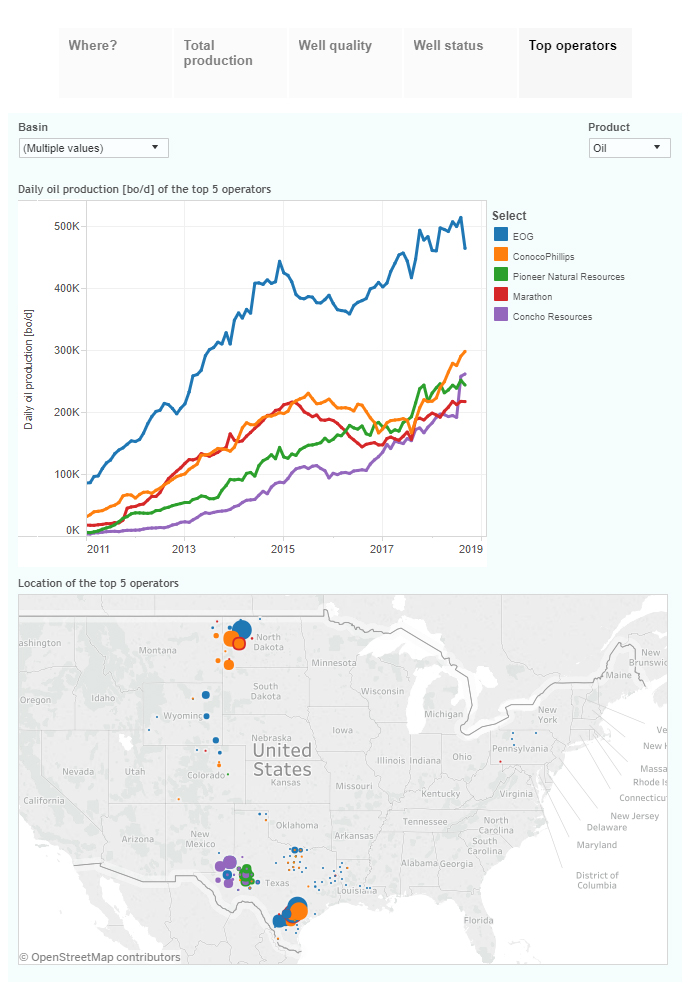 The final dashboard gives an overview of the largest operators. EOG is well in the lead, with around 0.5 million bo/d of operated production capacity. Its September production numbers for New Mexico are highly incomplete, so the final drop should be ignored. 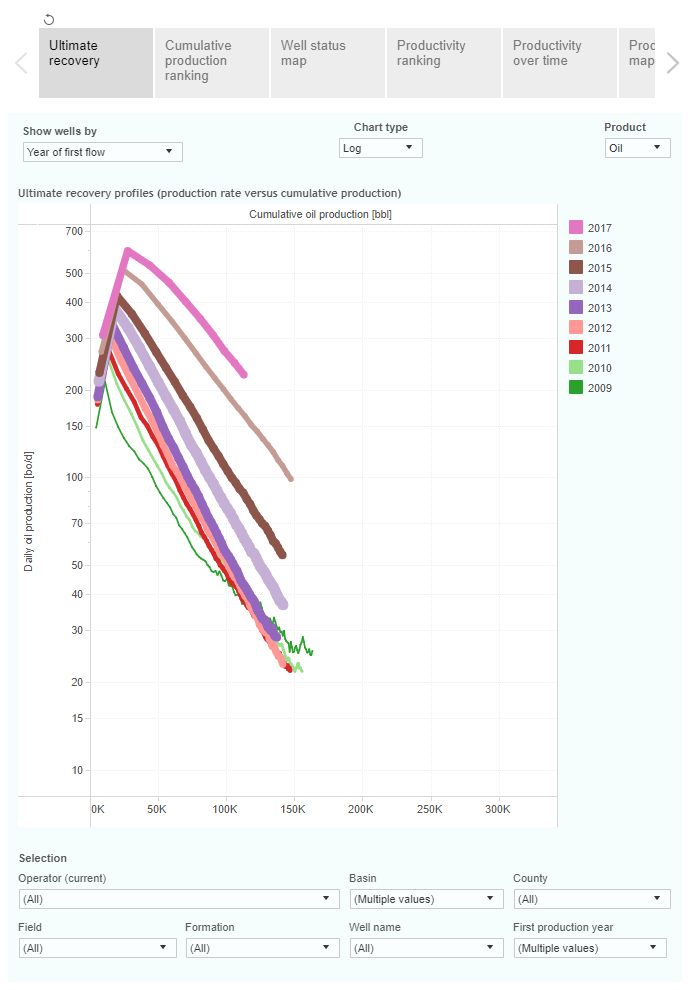 This “Ultimate recovery” overview shows the relationship between production rates and cumulative production over time. The oil basins are preselected, and the wells are grouped by the year in which production started.

The 4,300 wells that started production in 2011 (represented by the red curve) peaked at a rate of 273 bo/d, and they have now declined to 22 bo/d, recovering almost 150 thousand barrels of oil in the meantime (all average numbers).

The 5,300 wells that started 5 years later (2016 – light brown curve), peaked at 517 bo/d, and they already recovered the same amount of oil within 22 months, on average. They are on a trajectory to do roughly another 100 thousand barrels of oil, before having declined to a similar production rate of ~20 bo/d.

More granular and recent data will be visible after grouping these wells by the quarter or month in which they started production.

Next month we will be at the NAPE summit in Houston. Come visit our booth if you have the chance!

Before the NAPE we plan to start offering the Basic version of our ShaleProfile Analytics service. For just a very small annual fee ($624 = $52/month) you can already enjoy all the benefits that this service offers beyond the free blog here, such as maps with the exact location of these wells, full-screen dashboards, and with always access to the latest data.

Early next week we will have a new post on North Dakota, which just released November production data.

Visit our blog to read the full post and use the interactive dashboards to gain more insight http://bit.ly/2HgzW2F