These interactive presentations contain the latest oil & gas production data from 101,165 horizontal wells in 11 US states, through December 2018. 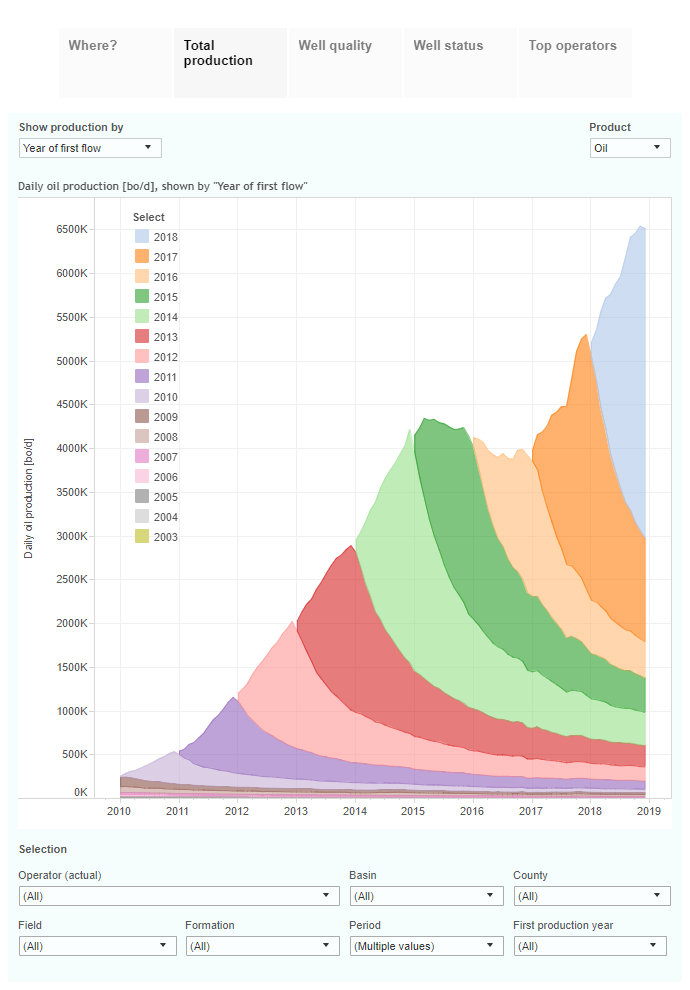 Cumulative oil and gas production from these wells reached 10.4 Gbo and 112 Tcf. West Virginia is deselected in most dashboards, as it has a greater reporting lag. Oklahoma is for now only available in our subscription services. Utah, where the Uinta Basin is located, is for the first time included in this update.

December production from these ~100 thousand horizontal wells was above 6.5 million bo/d, a y-o-y growth of 1.3 million bo/d (after revisions). This was a similar growth rate as a year earlier. Natural gas production increased to ~60 Bcf/d, growing by about 10 Bcf/d during the year, which also matched the growth in the previous year. 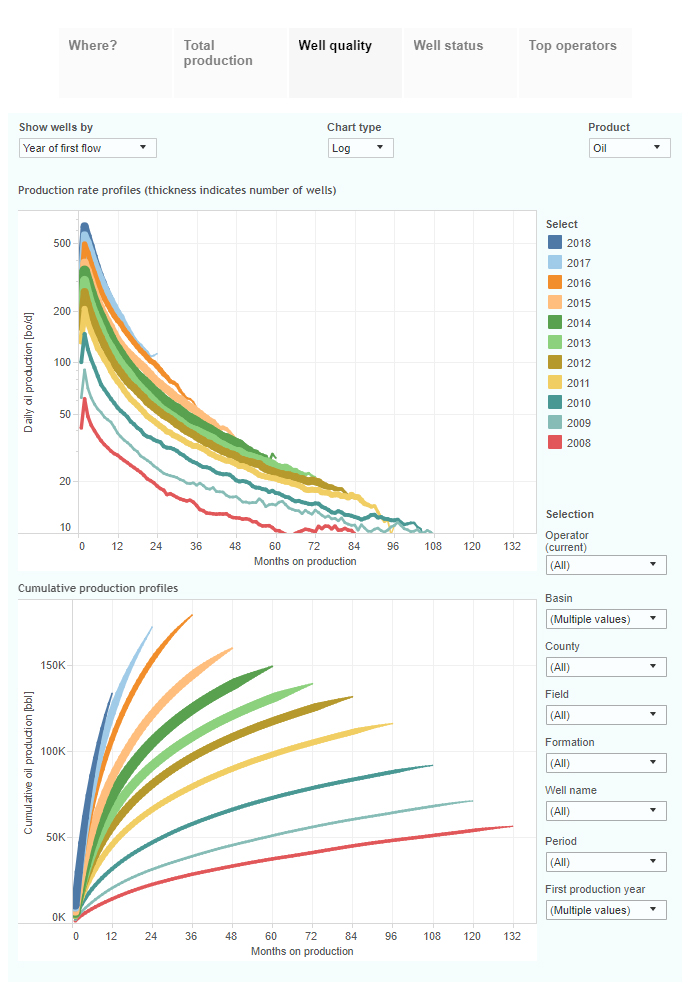 The production profiles for these wells can be seen in the ‘Well quality’ tab, where the oil basins are preselected. The average peak production rate grew by 12% in 2018 (635 bo/d vs 565 bo/d). If you group the wells by the quarter in which they began production (using the “Show wells by” selection), you will find that this increase in peak production rate continued throughout 2018. 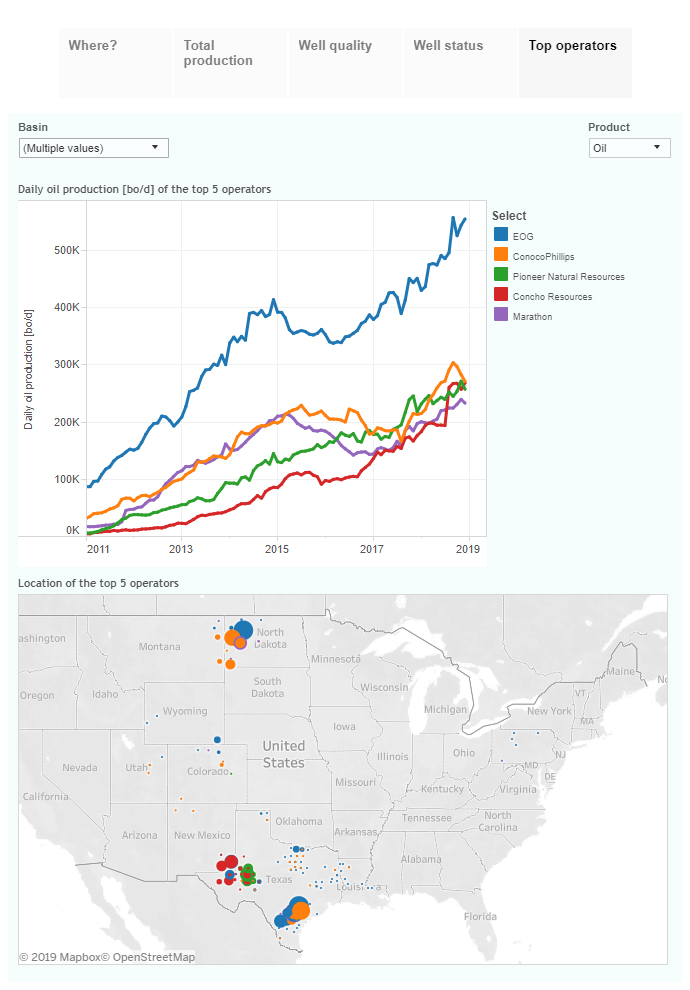 The final tab lists the top operators in these basins. EOG was far in the lead in December, followed by ConocoPhillips, Pioneer Natural Resources and Concho, which are basically sharing the 2nd spot. 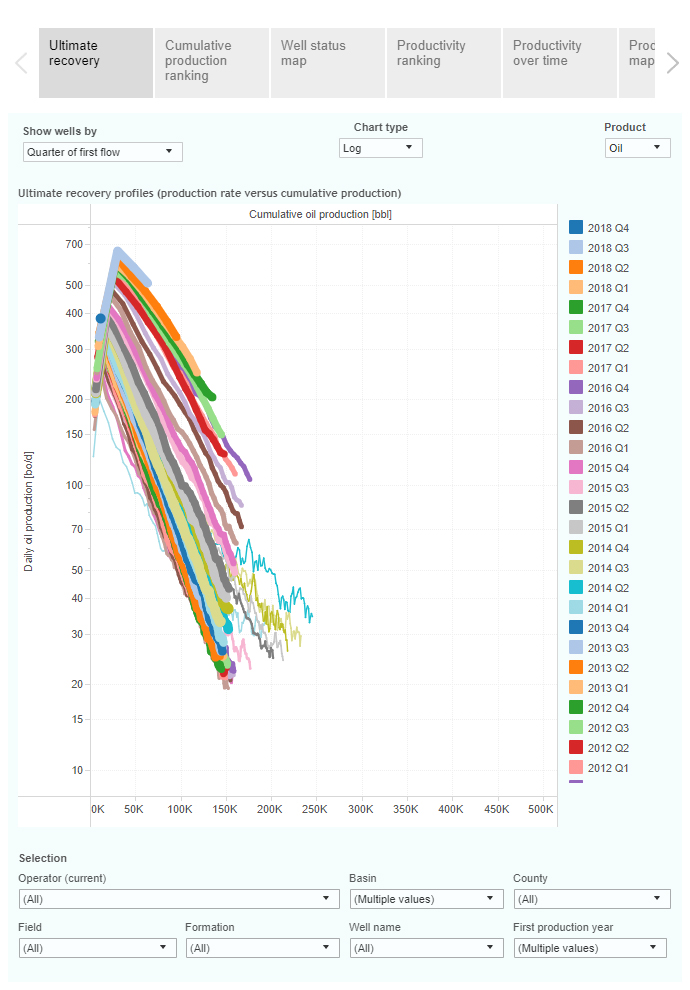 A major question now is whether this relationship between initial production, and ultimate recovery will hold up with ever more “child” wells being drilled. Unlike their “parent” wells, they do have nearby producing wells. We will explore this question in more detail in the coming months.

If you have questions that cannot be answered by the interactive presentations here, schedule a free demo with us here, or request a 10-day trial.

Early next week we will have a new post on North Dakota, which will release February production data by the end of this week.

Visit our blog to read the full post and use the interactive dashboards to gain more insight http://bit.ly/2G9Hf9S