These interactive presentations contain the latest oil & gas production data from all 20,021 horizontal wells in the Permian (Texas & New Mexico) that started producing since 2008/2009, through January 2019.

The chart above shows the massive growth in Permian production, as well as the underlying decline. Preliminary oil production for January came in at 3.1 million bo/d, which after revisions will be closer to 3.5 million bo/d. That means that all the wells that started before 2018 only contributed 1/3rd of total production in January.

Natural gas production, most of it associated with the production of oil, has also risen strongly. It is now well over 10 Bcf/d, placing the Permian above the Haynesville and the Utica, both in absolute numbers, and production growth.

The “Well quality” tab shows the production profiles of these 20 thousand horizontal wells. They are grouped and averaged by the year in which production began. Although activity has steeply increased, there has not been a negative impact on well performance so far. The ~5 thousand horizontal wells that started in 2018 peaked at a rate of 730 bo/d, more than 100 bo/d higher than the wells that began in the previous year. Still, after the rapid improvements in performance in the years up to 2016, a slowdown is apparent.

The final tab gives an overview of the 5 largest operators. Pioneer Natural Resources and Concho are now both above 250 thousand bo/d. Occidental and Anadarko are also in this list. Occidental recently made a higher bid than Chevron in the scramble for Anadarko’s assets. 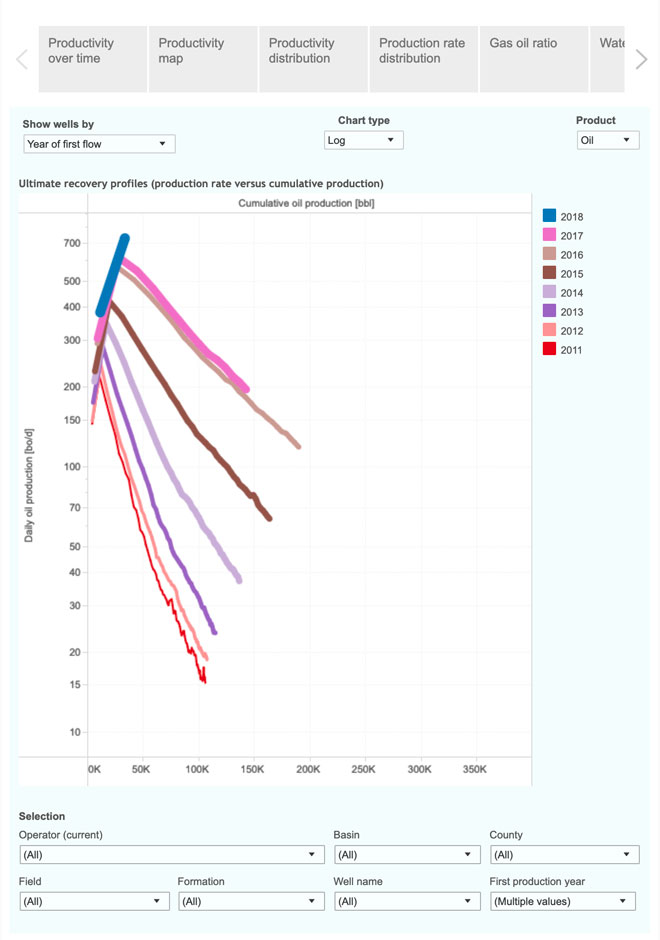 This chart also illustrates the steadily increasing well performance in the Permian, as the curves are trending to gradually higher recoveries. The 2,247 horizontal wells that began in 2016, represented by the light brown curve, recovered 182 thousand barrels of oil in their first 2 years on production. They are on a trajectory to recover close to 400,000 barrels of oil, before they decline to a level of 20 bo/d.

Early next week we will have a post on all covered states in the US.

Visit our blog to read the full post and use the interactive dashboards to gain more insight http://bit.ly/2VpW5Cm