These interactive presentations contain the latest oil & gas production data from 103,883 horizontal wells in 11 US states, through February 2019. Cumulative oil and gas production from these wells reached 10.8 Gbo and 116 Tcf. West Virginia is deselected in most dashboards, as it has a greater reporting lag for many horizontal wells. Oklahoma is for now only available in our subscription services. 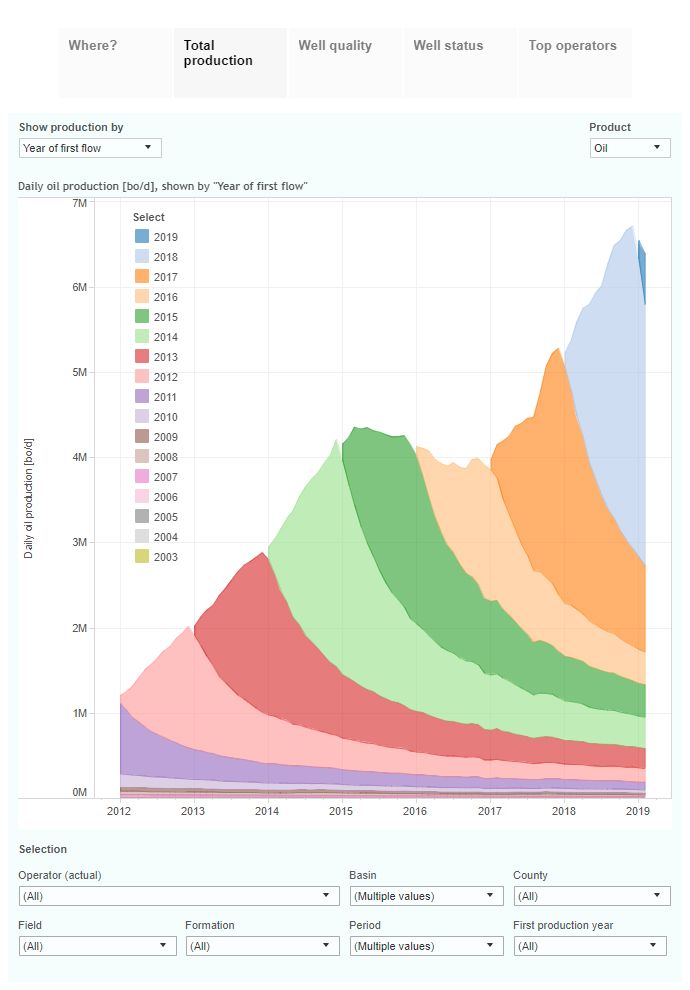 A thousand horizontal wells were completed every month last year, on average. But now the frantic growth in oil production in the past 2 years appears to have stalled. Production in the first 2 months of 2019 was slightly down, although revisions will probably bring the level back up close to the record in December, at just over 6.7 million bo/d. 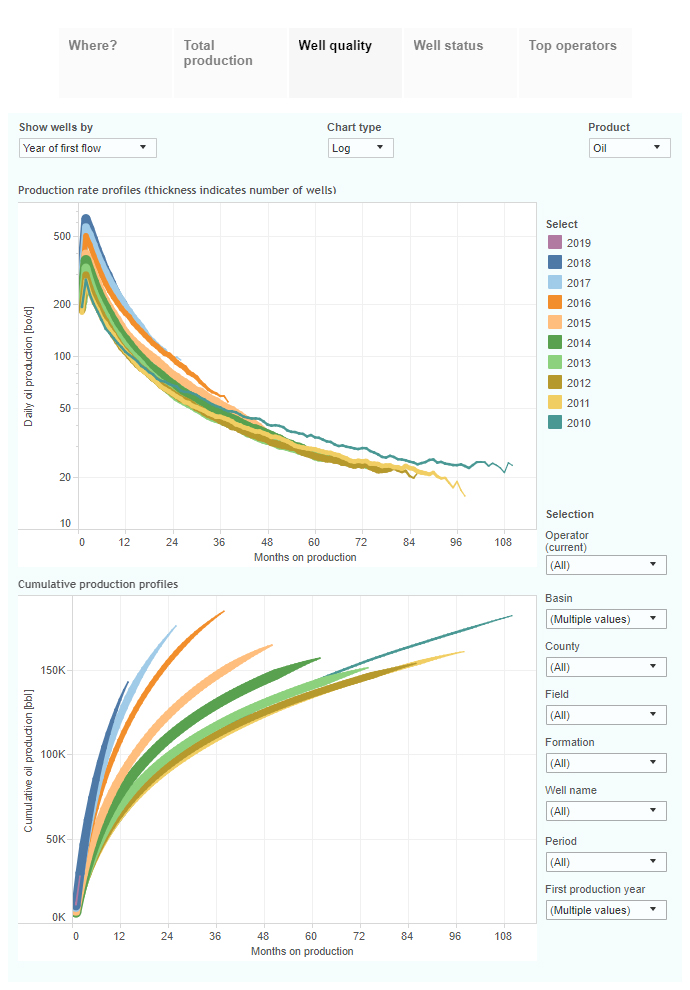 The “Well quality” tab reveals that average well productivity in the major tight oil basins increased again in 2018, but by a smaller margin than in the 5 preceding years. In the bottom chart (“Cumulative production profiles”), you will find that about 132 thousand barrels of oil are recovered in the first year, on average, versus 122 thousand barrels for wells that began production in 2017. 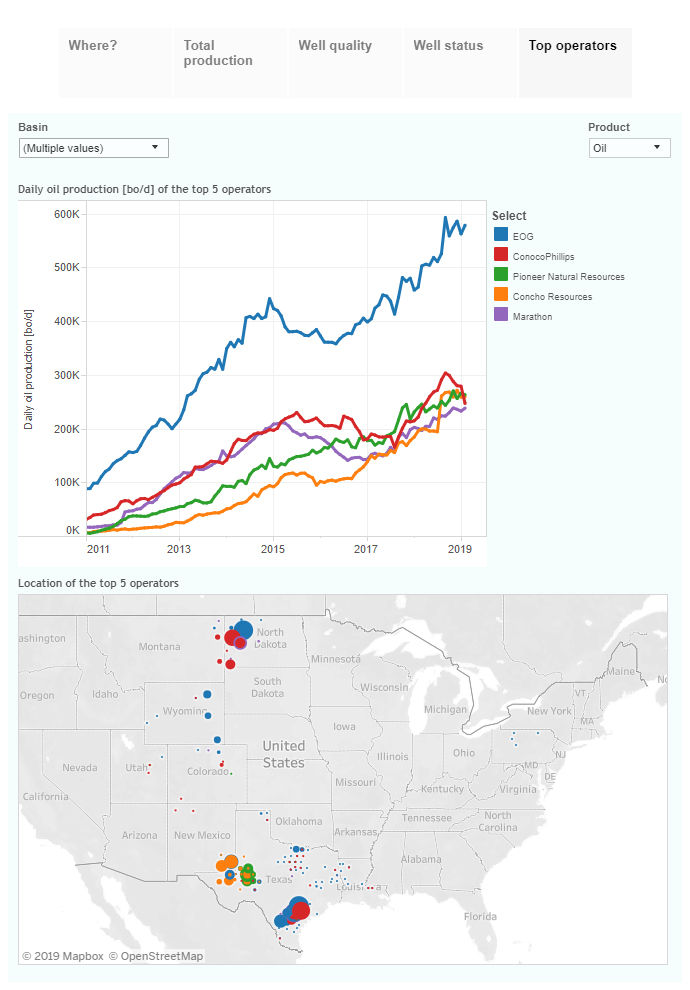 The final tab lists the top 5 operators in these basins. Most are near their production highs, although ConocoPhillips saw a large reduction in output in February, especially in North Dakota where it is also one of the largest operators. 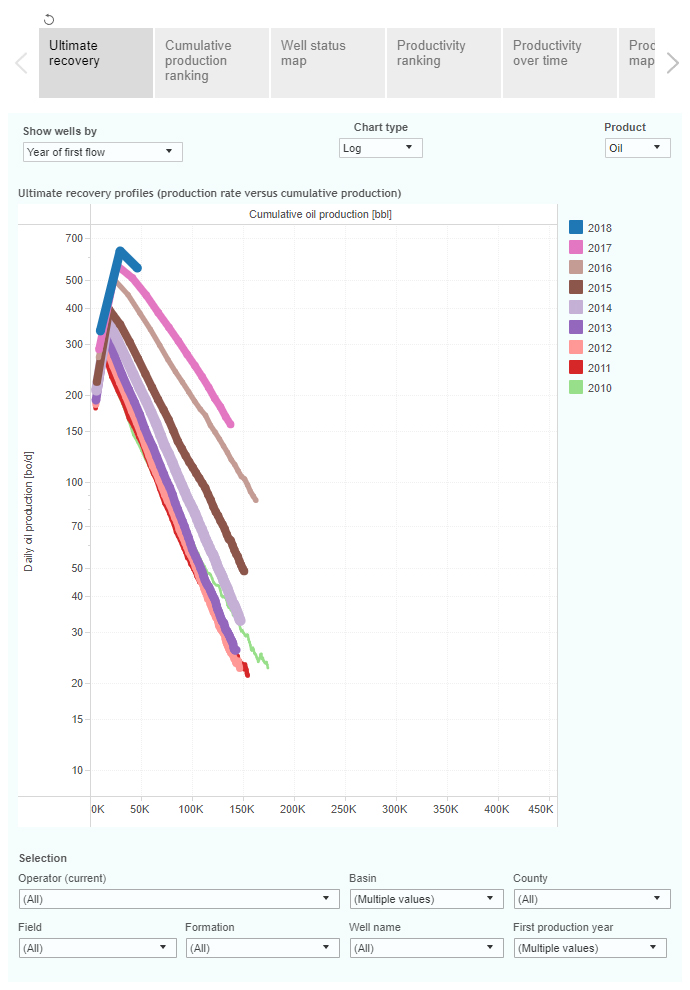 This chart confirms that initial well productivity in these basins has increased almost every single year. Associated gas production is up as well, as you’ll find if you switch ‘Product’ to ‘Gas’. The chart will then show that recent wells are also on a trajectory to recover well over 1 Bcf of natural gas, on average.

The following screenshot, from our Professional Analytics service, reveals the top 10 oil-producing counties in these major tight oil basins.

Click on the image to see the high-resolution version. McKenzie County in North Dakota is still clearly in the lead, followed by Reeves, Weld and Midland counties. Lea County (NM), in which output more than doubled in the past 2 years, is catching up fast.

In the coming week, we will release a major improvement for our data subscribers: a REST API, that allows our customers to keep their database closely synchronized with ours, which is updated on a daily basis.

Early next week we will have a new post on North Dakota, which will release April production data in the coming days.

Visit our blog to read the full post and use the interactive dashboards to gain more insight http://bit.ly/2WC8zap