These interactive presentations contain the latest oil & gas production data from all 5,773 horizontal wells in Arkansas that started production from 2006 onward, through March. 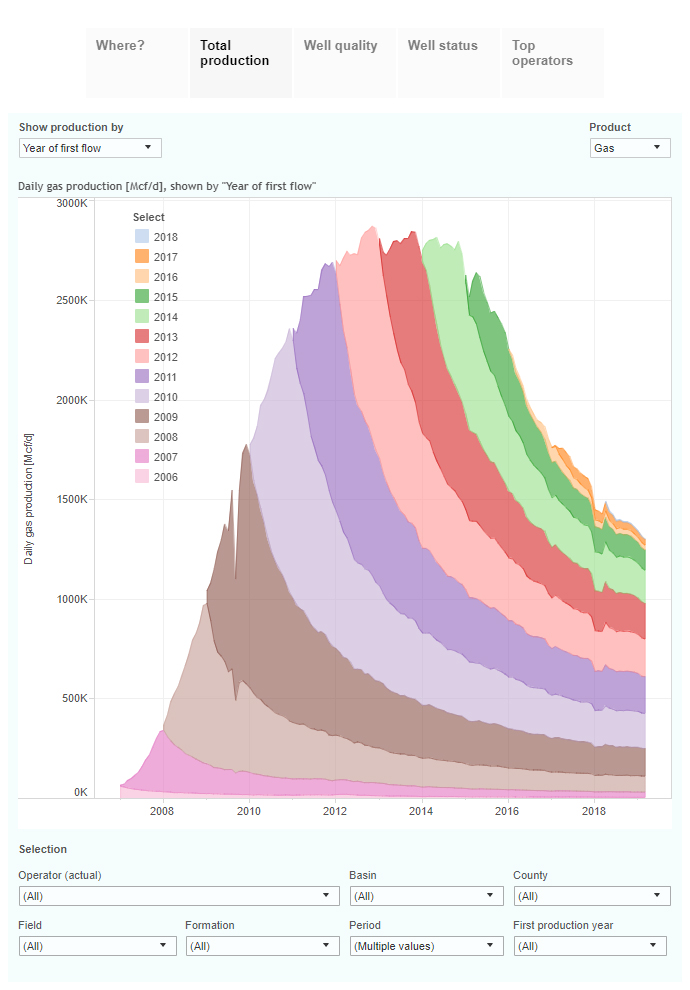 While we were waiting for some revision data for Pennsylvania, we finished adding Arkansas to our ShaleProfile data platform, which this post is all about.

Relative to the other states we cover, not much shale oil & gas is produced in Arkansas nowadays. However, it is home to the Fayetteville shale gas basin, which produced in its heyday close to 3 Bcf/d of natural gas. In March this year, it was down to 1.3 Bcf/d.

The graph above shows how output grew rapidly from 2007 to 2012, when natural gas prices hit a low. Interest started to wane, and since 2016 fewer than 100 horizontal wells have been completed. If you change the “show production by” to “Operator (actual)”, you will see that most of the gas in this play has been produced by a single operator, Southwestern Energy. However, last year it decided to exit the area and it sold its holdings to privately owned Flywheel Energy. 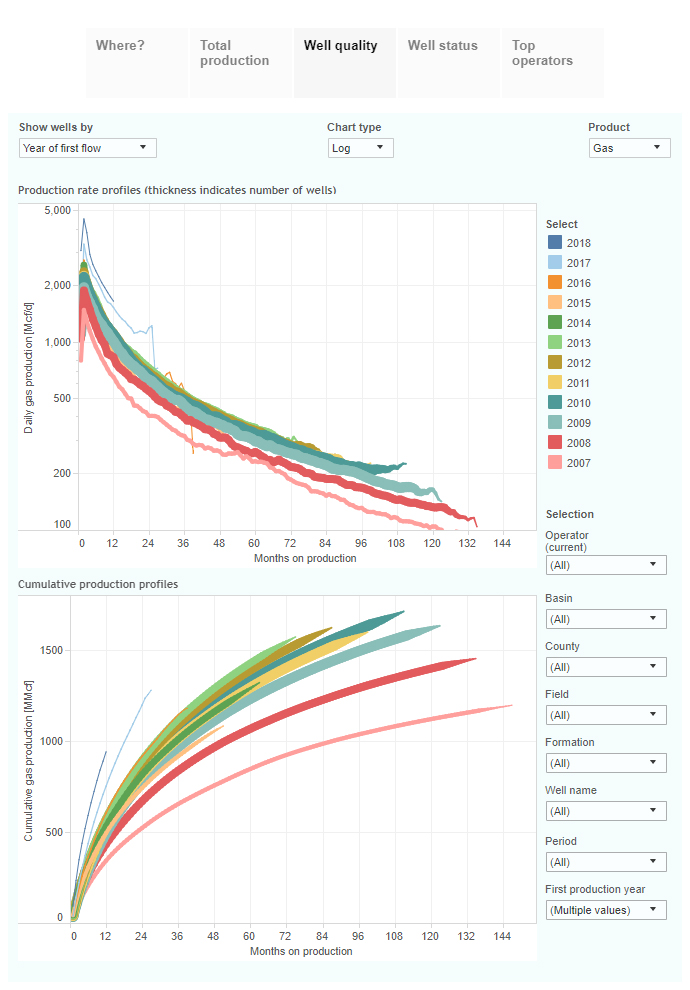 The “Well quality” tab shows the production profiles of all the horizontal wells in this area. It reveals that well productivity improved rapidly through 2010, but then rose no further. In 2014 and 2015, the last years that saw more than 100 well completions, well results actually declined. 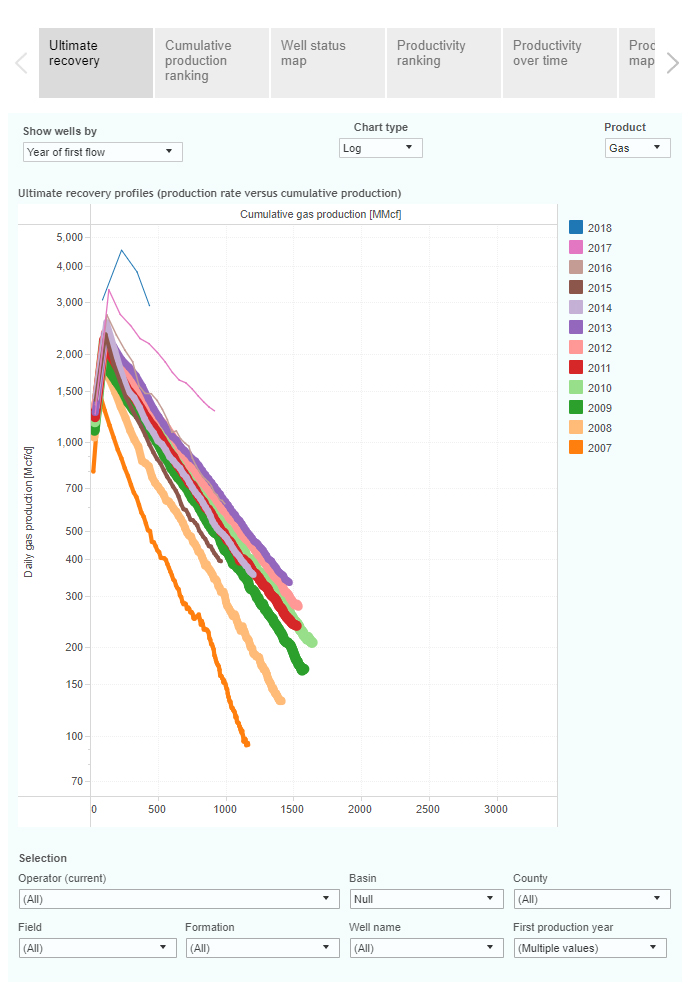 The 562 horizontal wells that began in 2013 have now recovered each 1.5 Bcf. Their average production rate has dropped to just 334 Mcf/d.

Almost all production in this play came from just 5 counties, which you’ll find in the 2nd tab (“Cumulative production ranking”), which ranks all counties by cumulative gas production since 2006.

The following screenshot, taken from a dashboard in our analytics service, shows the well results in 5 major US tight gas plays, as measured by the average cumulative gas production in the first 2 years on production. 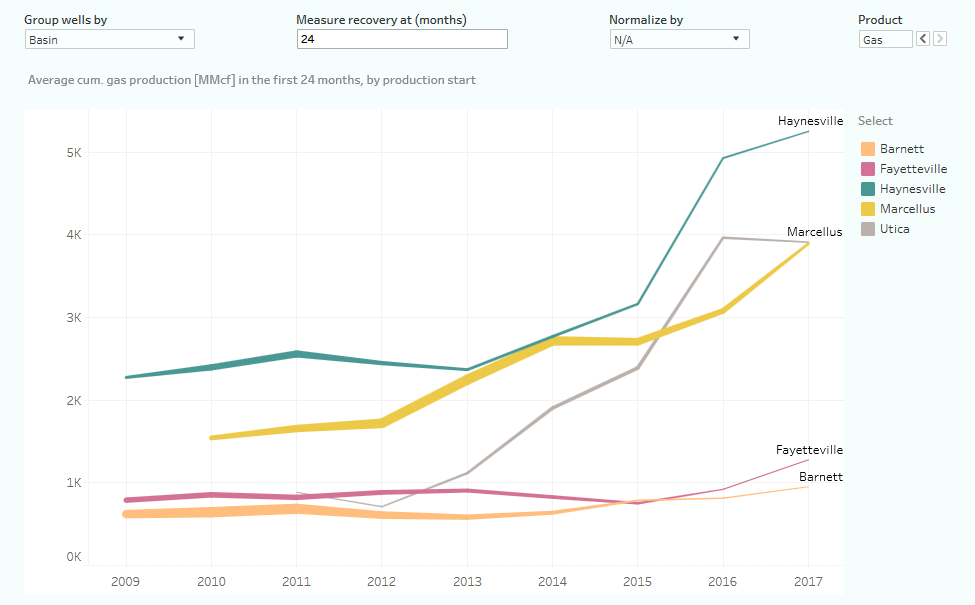 This clearly demonstrates that the Fayetteville and the Barnett could not compete with the Haynesville and the Appalachian basin.

Although we will probably not have separate updates about Arkansas anytime soon, it will now be part of the general “US updates”. Our Analytics and Data subscribers will always have access to the latest data in this state.

Yesterday we were glad to see that the Wall Street Journal decided to use again our service for their article about Pioneer Natural Resources. Find here the original story (behind paywall): A Leader of America’s Fracking Boom Has Second Thoughts.

If revised data is released soon, we will have a post on Pennsylvania later this week. Next week we will be back with updates on the Permian and the Eagle Ford, and a show on enelyst on Tuesday at noon (ET).

Visit our blog to read the full post and use the interactive dashboards to gain more insight http://bit.ly/2J9i7Qu