These interactive presentations contain the latest oil & gas production data from all 23,382 horizontal wells in the Permian (Texas & New Mexico) that started producing from 2008/2009 onward, through July 2019. 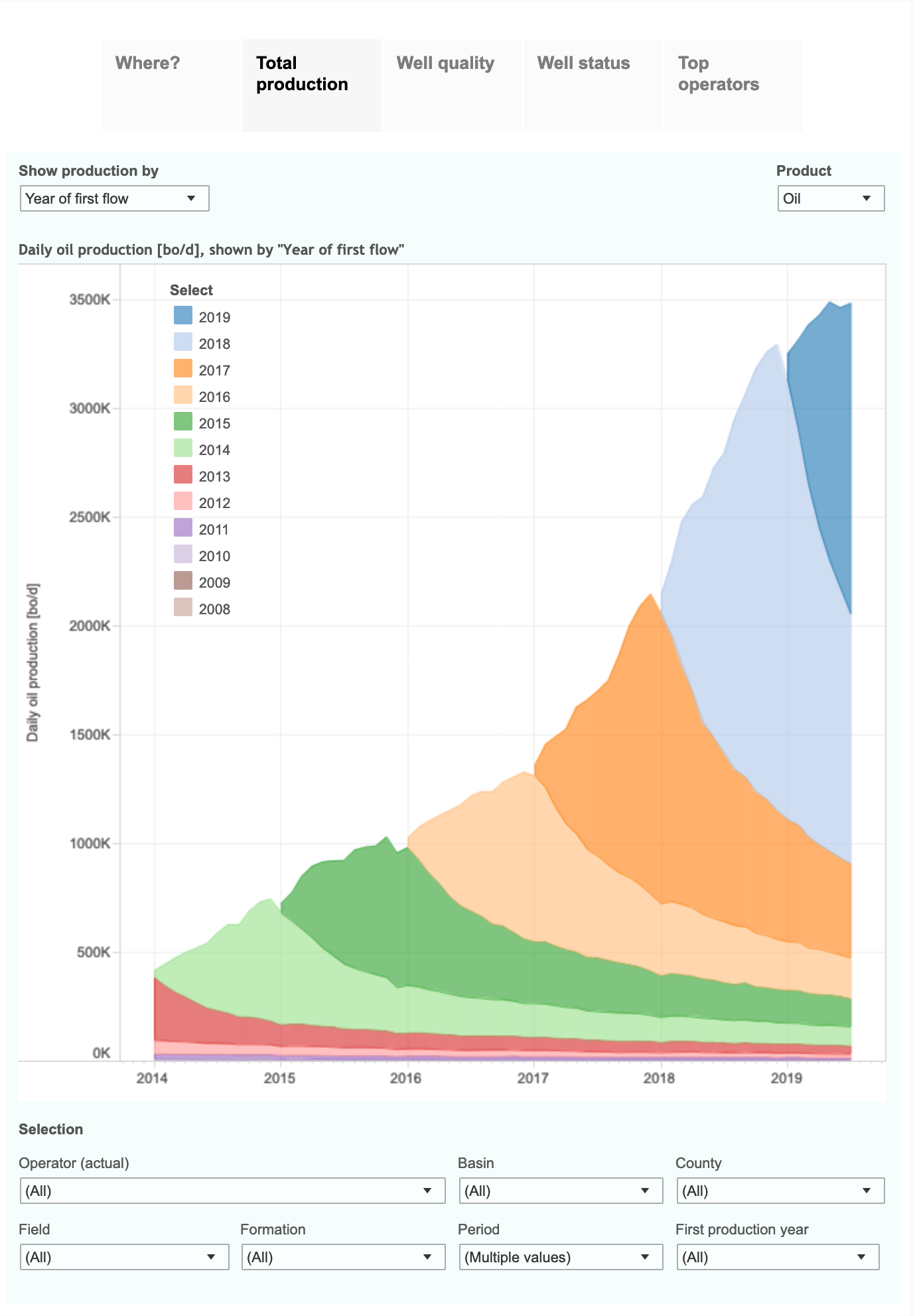 These interactive presentations contain the latest oil & gas production data from all 23,382 horizontal wells in the Permian (Texas & New Mexico) that started producing from 2008/2009 onward, through July 2019.

Upward revisions for the summer months were relatively large in the production data that the RRC released last week. Based on the latest actual data, May production in the Permian (including New Mexico) was already at 3.5 million bo/d, which will increase further once all revisions are in. July, also shown here at 3.5 million bo/d, will probably be revised even more (as is common for more recent months), to around 3.7-3.8 million bo/d eventually. August production data (>90% complete) is only available in our subscription services.

Initial well productivity is still slightly increasing, as you can find in the “Well quality” tab, which shows all the production profiles by year in which production started.

As mentioned in previous posts, this does not consider that well lengths and proppant loadings have increased over the years. Normalizing for lateral length, we still find that well results are basically unchanged since 2016, as shown in the following dashboard, which was taken from our advanced analytics service: 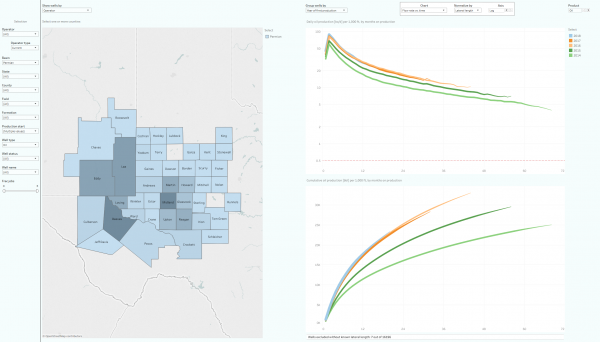 The performance of the 16,000 horizontal oil wells that began production between 2014 and 2018 can be seen here. Click on the image to see the high-resolution version.

The astonishing growth of production by the largest operators in the basin can be viewed in the final dashboard (“Top operators”). Concho and Pioneer were both at ~260 thousand bo/d in July (preliminary data). 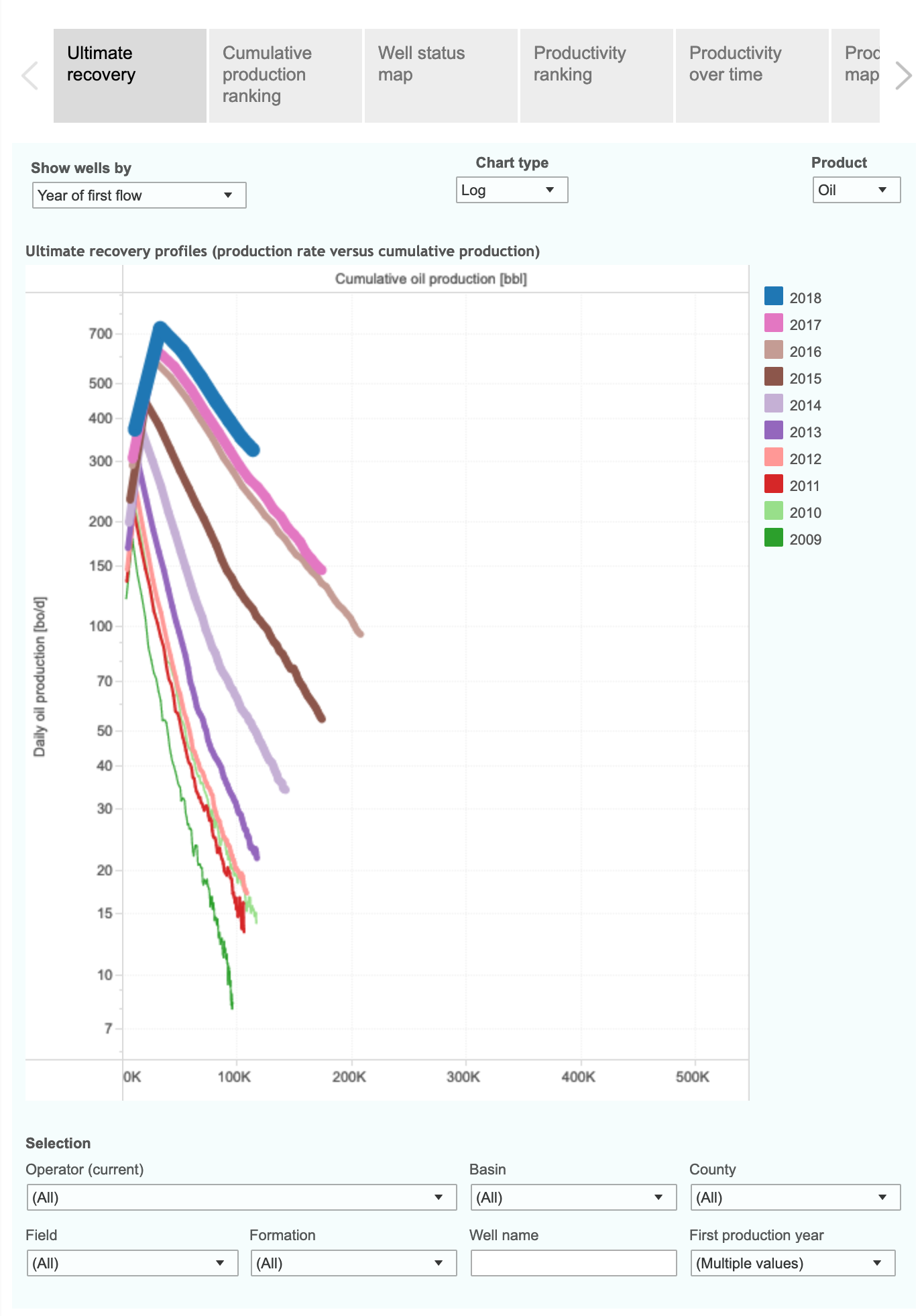 If new wells keep following the decline behavior seen in older wells, they are on a path to recover on average between 400 and 500 thousand barrels of oil, before they have declined to 10 bo/d (in addition to more than 2 Bcf of natural gas).

The gas-oil ratio has increased over the years in the basin, and is now at 3.5 (Mcf/bbl), which is also shown in the 9th tab (“Gas oil ratio”, bottom chart).

Later this week we will have a post on the Eagle Ford, where output has not increased this year.

Visit our blog to read the full post and use the interactive dashboards to gain more insight: https://bit.ly/32VUALU