This interactive presentation contains the latest oil & gas production data from 96,273 horizontal wells in 10 US states, through August. 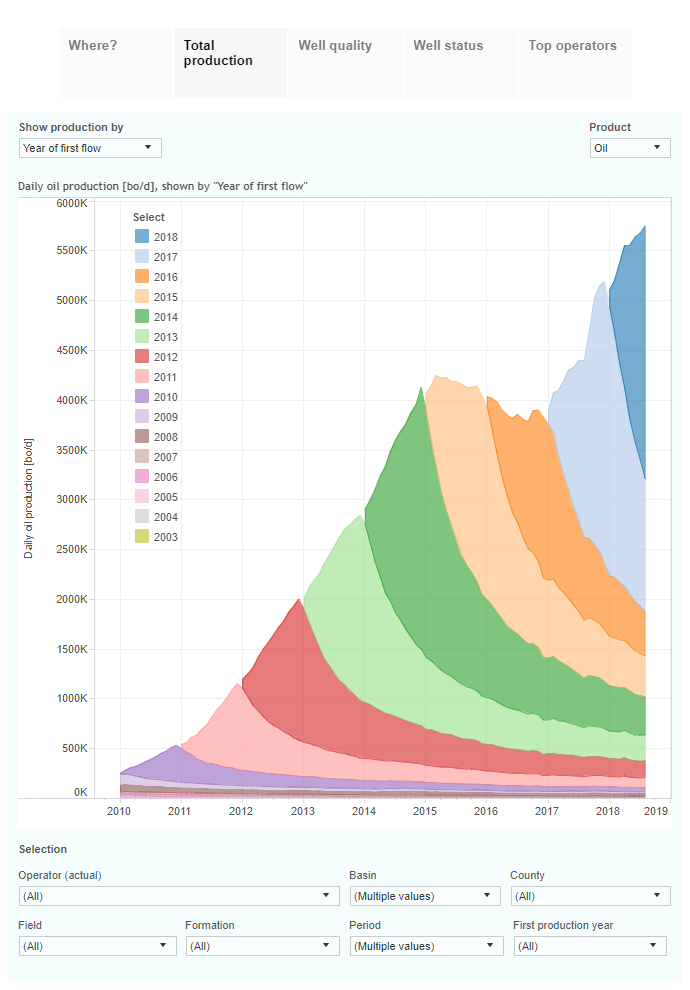 Cumulative oil and gas production from these wells reached 9.5 Gbo and 104 Tcf. Ohio and West Virginia are deselected in most dashboards, as they have a greater reporting lag.

Oil production from horizontal wells in these states grew by almost 2 million bo/d in the 2 years through August. This growth rate was similar as in the boom years of 2013-14. The Permian was responsible for most of this gain, which you’ll see if you show the production data by ‘Basin’ (using the ‘Show production by’ selection).

Natural gas production has been setting new records as well during those 2 years and was above 47 Bcf/d in the basins we cover. 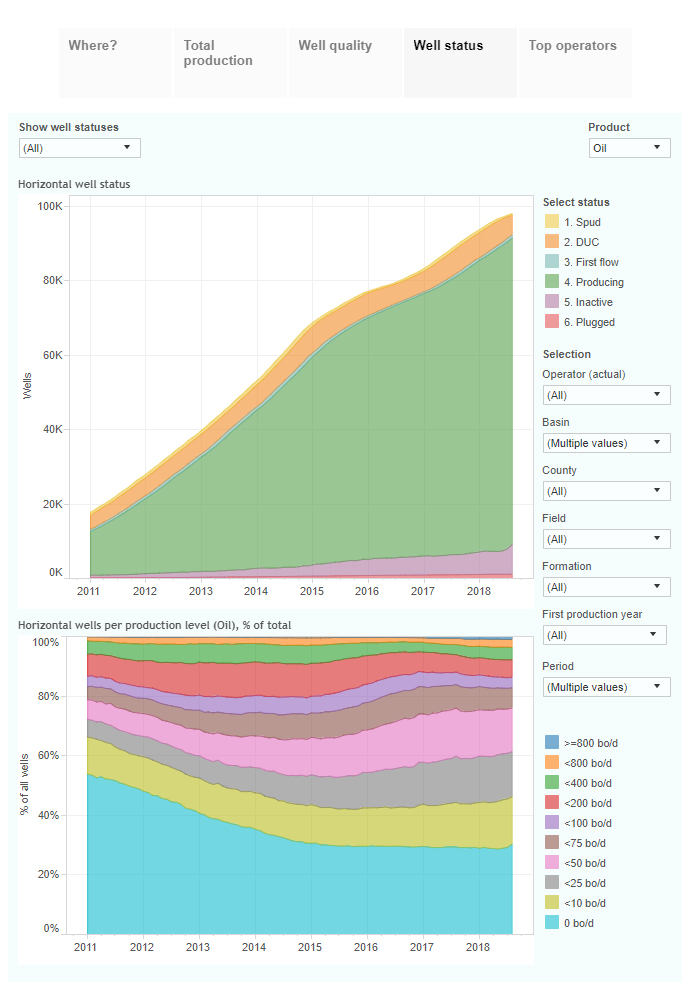 The steady increases in well productivity are shown in the ‘Well status’ tab, where all the oily basins are preselected. The horizontal wells that started in 2018 are so far closely tracking the performance of the ones from 2017. 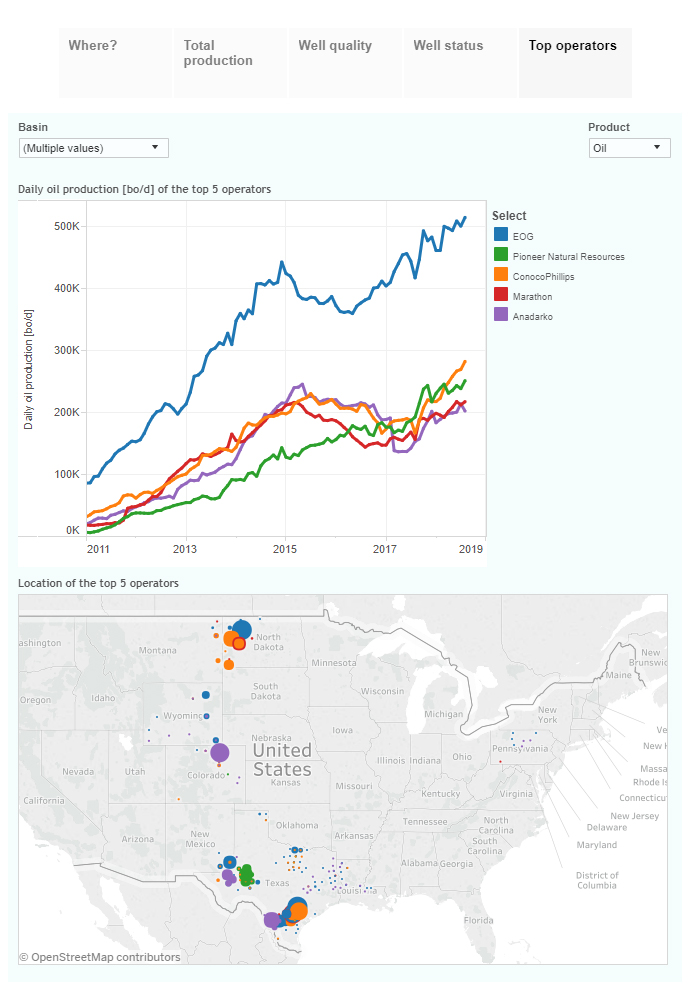 In the final tab you will find the production histories and location of the largest shale operators. We’ve made a change in this dashboard; now the operators are ranked by their total production in the past 12 months (and not by their total historical production). This makes especially a big difference in the Permian, where several operators have recently increased production at a rapid rate. 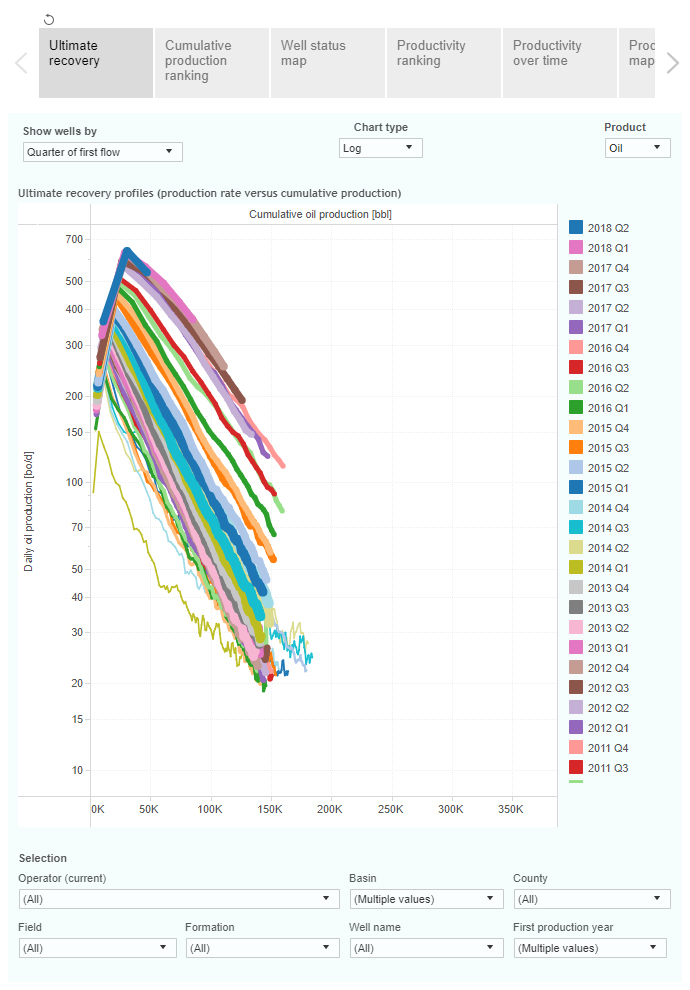 This “Ultimate recovery” overview shows the relationship between production rates and cumulative production over time. The oil basins are preselected, and wells are grouped by the quarter in which production started.

Since about 2010 wells have been tracking ever larger ultimate recoveries. The ~1,300 horizontal wells that started in Q4 of 2016 appear so far among the best performers; they have recovered on average 160 thousand barrels of oil and are now at a production rate of ~110 bo/d (from a peak rate of 570 bo/d). These are of course averages, and there are major differences between basins, operators and formations.

Major factors behind the changes in well performance are the increases in lateral lengths and the larger frac jobs. In our online analytics service, it is possible to normalize for these factors. Feel free to request a demo, in which we will discuss your interests, or 10-day trial.

We sometimes get the question about what we do with wells when they stop producing. In these cases we keep adding 0 production records, to make sure that wells don’t suddenly drop out of the equations, which would lead to a survivorship bias. You can verify this, as the exact well count is shown in the tooltips that appear above the production profiles (this is also represented in the thickness of the curves).

Tomorrow at 9:30am EST we will again host a show at enelyst, in which we’ll take a closer look at the Niobrara basin. Join us in the ShaleProfile channel.

Early next week I will have a new post on North Dakota, which will release October production data by the end of this week.

Visit our blog to read the full post and use the interactive dashboards to gain more insight http://bit.ly/2EbfM6U