At present, OPEC+, the Organization of Petroleum Exporting Countries plus Russia, resembles an unstable nucleus of a radioactive atom; judging by what we hear on political front, there seems to be an uneasy compliance with self-imposed quota-limits with murmurs of cacophonies.

Although crude price dipped slightly over the past two days, it is still high and countries that desperately need petro cash to prop up under-performing economies are deprived of a once-in-a decade opportunity to cash in on the fortune.

These nations, exactly like sub-atomic particles in an unstable nucleus, do make subtle manoeuvres in seeking unknown freedom, while securing their positions within where they belong to – the crude oil cartel, in this case.

The current predicament of Iraq is a case in point.

Bloomberg reported this week that export of crude oil by Iraq in the first half of February was higher than what was permitted by the loose-agreement by the OPEC+.

If officially confirmed, not only did Iraq break the convention, but also went back on the earlier pledge to the OPEC+, to cut down on production in order to compensate for the overproduction in the past.

The recent OPEC+ agreements regarding the self-imposed production cuts seem to be having a few loopholes for member nations to slip through.

The disgruntled members in the organization, for example,  can argue – with a reason – that export is not synonymous with production and come up with their own equation, exports = stockpiles + permitted production by the OPEC+ agreement; the second part of the equation does not come within the purview of the production cuts; a classic case of small print at play!

Unlike most of the OPEC+ members, Iraq – and Nigeria for that matter – has to deal with a range of critical socio-economic issues internally, some of which could potentially threat the very existence of the federation.

In addition, it is sandwiched between two regional power players along the religious lines – Shia dominated Iran and Sunni dominated Saudi Arabia; moreover, the federal government has very little control over the crude oil production – or overproduction – by its semi-autonomous Kurdish region.

The widening gap between the Sunni and Shia communities in Iraq does not help things either for the beleaguered federal government.

Since the West has all but abandoned its perpetual military presence in Iraq in the presence of regular hostile acts by Shia militants, the atmosphere for much-needed investments is not conducive at present, despite the government’s PR drive to say otherwise.

If the two main communities based on religious affiliations do not bridge the gap, security analysts fear that Iraq will be back where it was before 2017 with the ISIS making a comeback; in this context, the Iraqi government cannot afford let the Sunni community feel that they have been marginalized  - once again. 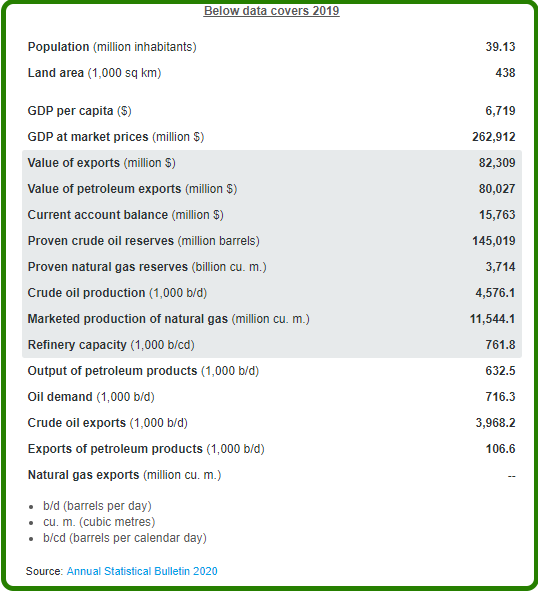 According to the estimates based in 2019 by the OPEC, Iraq has the 5th largest oil reserves in the world. If Iraq just consumes crude oil without exporting them, which is very unlikely, these reserves will last over 147 years; if it carries on exporting at the current rate, the reserves will still last over 87 years. In short, unlike most countries on the planet, the Iraqis will not see an energy crisis in foreseeable future.

It’s sad to see the way Iraqis still suffer and have to demonstrate in order to win basic rights for their existence despite the above enviable numbers.

Iraq needs a leadership with a clear vision to turn around the current situation in order to reap the full benefits of the black gold that it’s blessed with for decades to come.