The oil price is not only relevant for insiders in the oil industry. It is important for the entire economy; politicians and central banks keep their eye on it. But how is the price of oil actually determined?
Like every price, the price of oil is a result of the interplay between supply and demand. Plus, there is the economic environment which can lead to longer-term changes.
An overview of the key factors:

There are different oil grades and countries where these are produced under different conditions. Twelve nations that produce oil around the world make up OPEC (Organization of the Petroleum Exporting Countries). OPEC covers about 40 percent of the global oil production. They influence the price development of crude oil when they restrict or increase the amount they produce. The rule is: When the supply decreases but the demand remains high, the supply becomes that much more valuable – and expensive.
In the past five years the supply of oil has risen dramatically outside of OPEC countries – particularly in the US. In recent years the US has transformed from one of the biggest importers of energy to an important energy producer. The main reason is fracking. “Fracking is the technology that made shale oil production profitable in the USA,” says Johannes Benigni of the research and consulting center JBC Energy. New sources of oil were opened up, so the supply has grown. The production of natural gas and crude oil in the US have increased by 50 and 75 percent, respectively, since 2005, the consultant says. It is becoming more difficult to calculate the price since the supply is no longer coming exclusively from OPEC, now other countries also have a strong influence.
However, the supply is also influenced by the conditions under which oil is produced. The price of producing one barrel can vary between a few USD per barrel and up to USD 80. Government guidelines like environmental regulations or difficult geographical circumstances increase the production costs. “Some of the most expensive barrels are those in difficult locations like the deep sea. Production in challenging geological formations also raises the price of the supply,” . “When the demand is small and the oil price is accordingly low, comparatively ‘expensive’ production doesn’t pay off anymore. This then reduces supply, which influences the price of oil,” explains Wolfgang Ernst.

“How much oil is needed depends on global economic development as well,” says the OMV expert. At the moment the market is primarily being driven by development in Asia. The demand in China and India, for instance, has increased sharply in the past two decades, because the economy is growing faster there than in Europe. A rise in population growth, for example, can also increase the demand for energy – and therefore oil – in the long term.
But the oil price can fall in spite of a growing economy, because “the price is also determined on the demand side by other factors like taxation, weather, and environmental regulations,i. The International Energy Agency (IEA) forecasts in the current World Energy Outlook that the energy demand in Europe will fall slightly. We will also see shifts resulting from a rising demand for renewable energy.

Conflicts and political crises as well as disruptions in deliveries due to weather, such as environmental catastrophes, can have a negative effect on the oil supply. In the past, these often led to a higher oil price, because declines in production were anticipated. Today Libya, Syria, and Yemen have virtually dropped out as oil producing countries due to their political instability; the years of sanctions against Iran are still applied. However, shale oil production in the USA has increased sharply. “Otherwise the oil price could have been much higher between 2009 and 2014,”

Oil is also traded on the financial market in much larger amounts than OPEC produces. Wolfgang Ernst: “Many companies in the energy industry protect themselves against price fluctuations with financial market activities.” Purely financial actors then bet on price changes and try to make a profit that way. Psychological factors and expectations play a role here. “In the short term, speculations on falling or rising prices may very well determine the price development. However, almost all studies show that there is no or only a temporary limited connection between speculation and absolute price levels,” 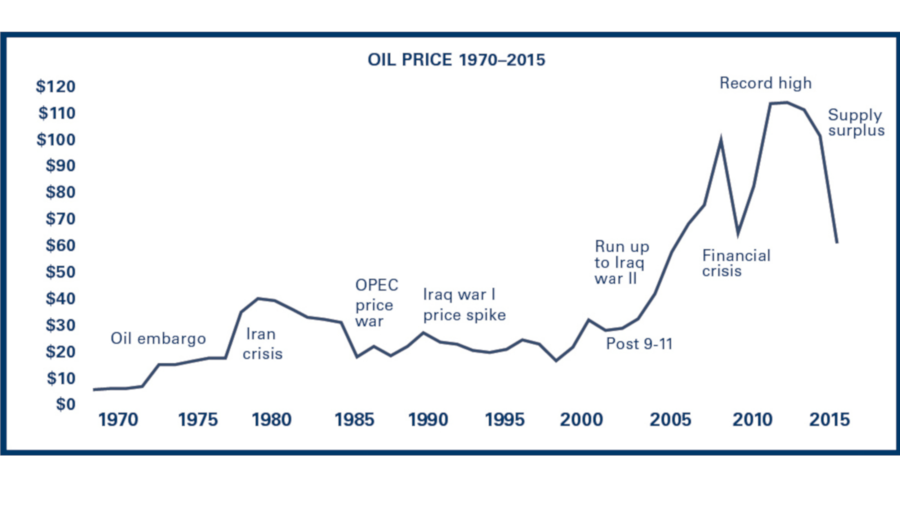