The Petronas Dividend of RM 30 Billion has been in the Malaysia news lately. Here's an excerpt from an article yesterday:

Wong Chen (PH-Subang) pointed out that Petronas’ cash reserves, as of last year, stood at RM128 billion, and the profit after tax was RM46 billion.

“This worries me because we know there is a huge possibility Malaysia will be stuck in the trade war between US and China.

“If we use all the money now, the financial power of RM54 billion, we may run out of ‘financial bullets’ when the crisis really hits,” he said in the Dewan Rakyat when debating the Budget 2019.

The RM30 billion special dividend is part of RM54 billion that Putrajaya is asking from Petronas next year.

It will be utilised to fully settle the outstanding tax refunds estimated at RM37 billion — RM18 billion in income tax and RM19 billion in goods and services tax (GST).

Wong stated that while he understood Finance Minister Lim Guan Eng’s anger and frustration in inheriting the financial woes of the previous administration, he was of the view that Parliament needs a guarantee that a special dividend of this nature cannot be repeated in next year’s budget.

Yesterday, I had commented on LinkedIn a bit about this. Generally, my view is that if this is a one-off higher than normal dividend from Petronas, then it shouldn't be a problem. My concern is if this is an old crutch that is getting long in the tooth from decades-old age and too much reliance on Petronas to provide money.

For some perspective, let me turn back the clock a couple years, when I interviewed Dr. Mahathir about Petronas in 2016. Here is an excerpt of my one-on-one interview: 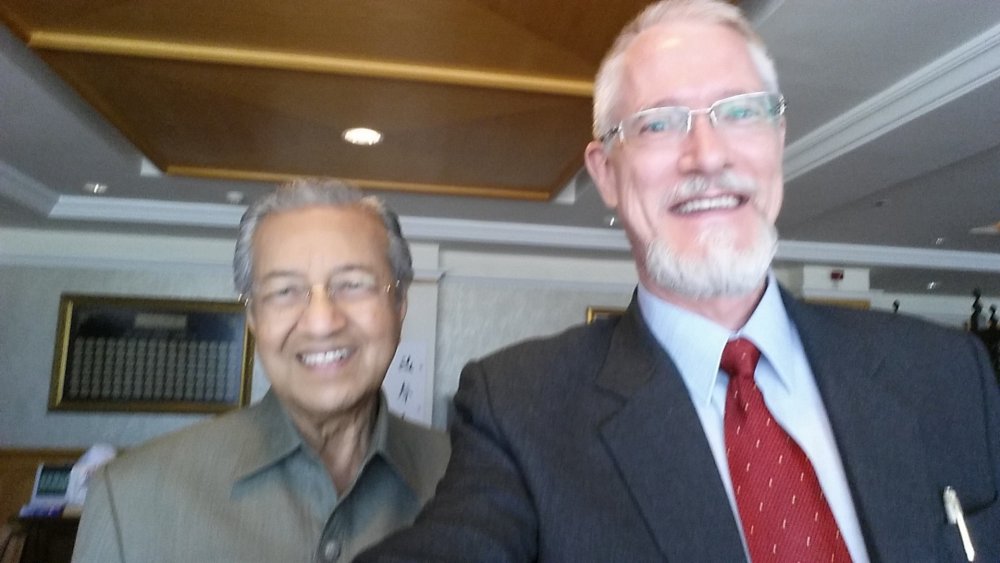 Dr.  Mahathir bin Mohamad was the 4th Prime Minister of Malaysia. He held the post for 22 years from 1981 to 2003, making him Malaysia's longest-serving Prime Minister.

After stepping down as Prime Minister, Dr. Mahathir took on the role of Petronas Advisor in 2003.

On March 11 2016, the Malaysian government terminated the services of Dr. Mahathir, due to a political dispute between former Prime Minister Mahathir and the current Prime Minister Najib Razak.

The Prime Minister's Office said in a brief statement that the Cabinet had discussed the actions of Dr. Mahathir, and decided that since he was "no longer supporting the current Government, he should no longer hold any position related to the Government."

On 30th March 2016, Dr. Mahathir was kind enough to agree to an interview with Oilpro Moderator Tom Kirkman, to discuss Petronas. ...

Dr. Mahathir:  Well, Petronas is regarded by the government as some kind of cash cow.  When the government is short of money, or needs to have some investment, usually they pump it off on Petronas.  And currently, the government is really short of money.  They have mismanaged things, including borrowing huge sums of money.  So they are in deficit.  And what we do know is that they have been cutting back on budgets, by 20% last year, and again 20% this year.

It would seem that the government finds difficulty borrowing.  So, asking Petronas, which has more credit-worthiness, I think, is the way for them to borrow.

Things have changed quite a bit since that interview in March 2016. Personally, I think Dr. Mahathir and Lim Guan Eng (the Finance Minister) and the new federal government are doing an overall great job in rescuing and repairing the country's financial mess, left behind by the previous administration.  Notably, working to clean up the mess of 1MDB.

And I understand a stop-gap measure of increasing the Petronas Dividend this year to help alleviate the budgetary shortfall as the federal government works to pay down earlier commitments and reduce debt.  Again, cleaning up the financial nuclear fallout from 1MDB won't happen overnight.

This time around, Petronas actually has sufficient cash reserves to pay a higher dividend. Compare that with the situation a couple years ago... here's another question and answer from my interview in 2016:

Question: Petronas has recently stated that they may have to borrow money in order to pay their RM 16 billion dividend for 2016. Petronas originally wanted to pay only RM 9 billion in dividends for this year, but the government announced that Petronas was going to pay RM 16 billion in dividends for this year. About a month ago, Petronas announced that they will likely have to go in debt in order to pay the government dividend this year.  Do you have an opinion about that?

Again, if this is a one-off higher than normal Dividend this year from Petronas, then it should be no problem. Next year, the dividend should be reduced, to allow Petronas to re-invest more in new Exploration & Production activities, both domestic and overseas.

Just my opinion; as always, you are free to disagree.

“I have﻿﻿﻿﻿﻿ always strenuously supported the right of every man to his own opinion, however different that opinion might be t﻿o mine.  He who denies to another this right, makes a slave of himself to his present opinion, because he precludes himself the r﻿ight of changing it.”