This interactive presentation contains the latest oil & gas production data from all 21,912 horizontal wells in the Eagle Ford region, that started producing since 2008, through October. 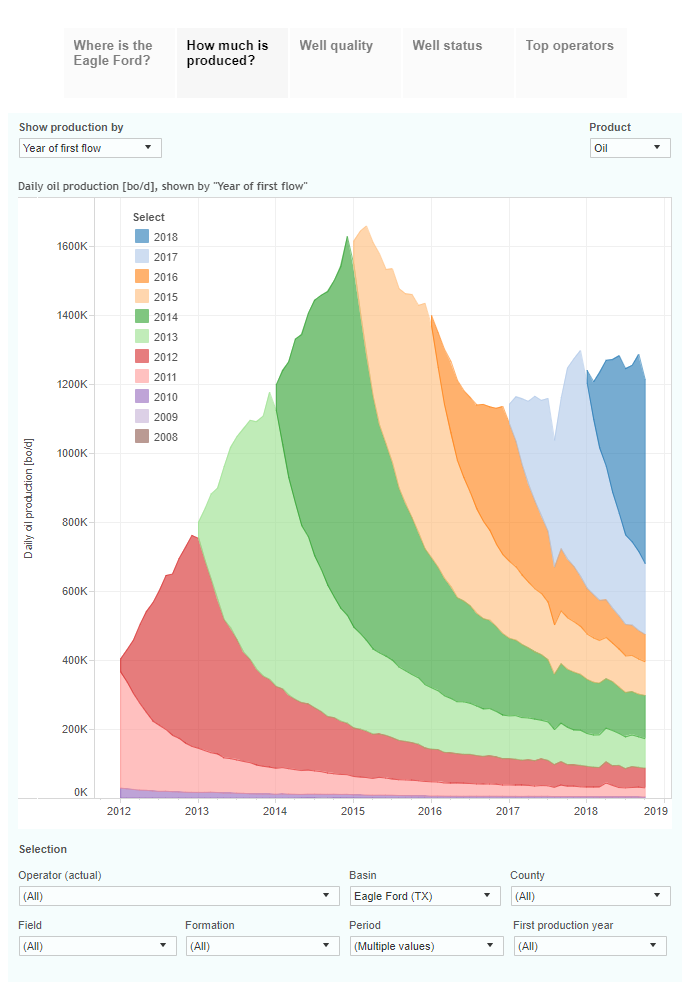 Oil production increased slightly in the Eagle Ford in 2018, as operators completed ~10% more wells than in 2017, based on preliminary data. Once revision data is in, I expect that October production will be close to 1.3 million bo/d. Gas production from these wells is good for almost 6 Bcf/d (toggle ‘Product’ to gas to see this). 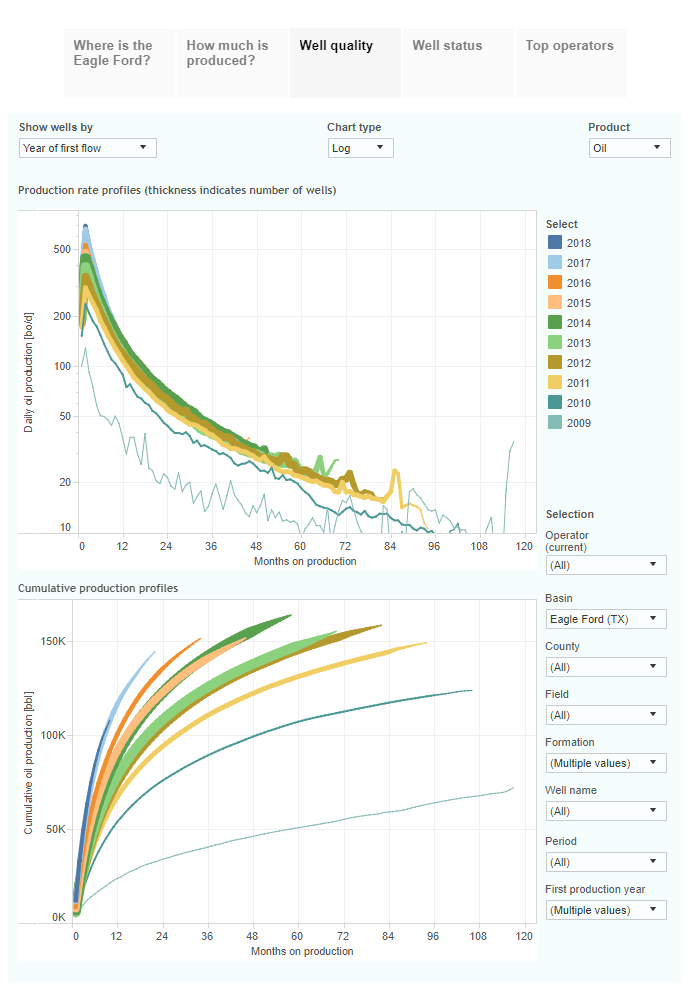 Average initial well productivity almost didn’t change year-over-year, as you’ll see in the ‘Well quality’ tab. If you click there on 2018 in the legend, you’ll note that the wells that started last year are so far closely tracking the performance of the 2017 wells.

Although newer wells are peaking at more than double the rate than wells that started in 2011/2012, they are also declining faster. I expect that after 2-3 years on production, they have declined to a very similar production rate as those earlier wells had at that age. That becomes especially apparent if you select for example just the wells from 2012 and 2016 (keep the ‘Ctrl’ key in when selecting both of these years), and if you change the axis to a linear scale. I’ll show you more about these decline rates later in this post. 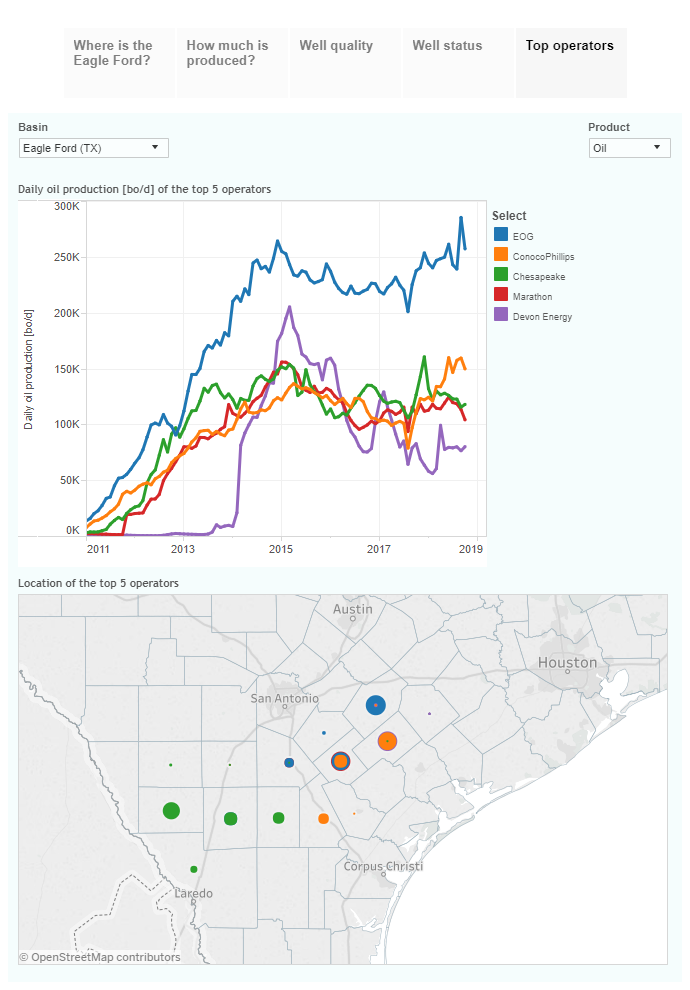 Of the top 5 operators in the Eagle Ford, only the 2 largest (EOG & ConocoPhillips) set new production records in September, 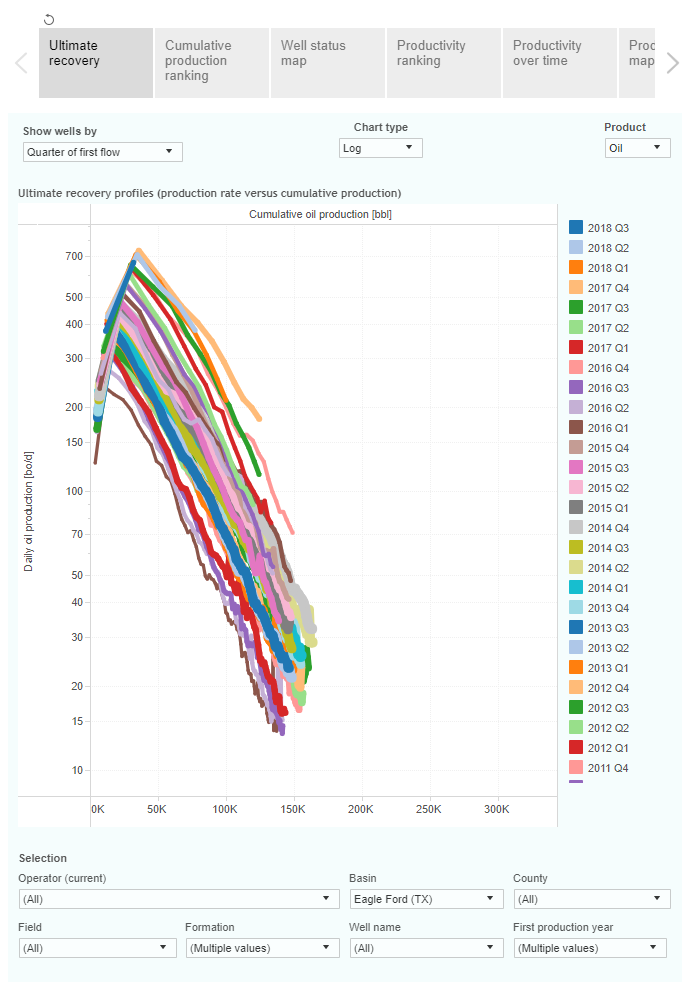 In this “Ultimate Recovery” overview, the relationship between production rates and cumulative production is revealed. Wells are grouped by the quarter in which production started. I’ve preselected the Austin Chalk and Eagle Ford formations.

As I showed last week for the DJ Basin, also here you can see that the decline steepens once wells have reached low levels of production.

How large are the decline rates here? To answer this question, I again used our new ‘Terminal decline’ dashboard from our Professional Analytics service. See here the result: 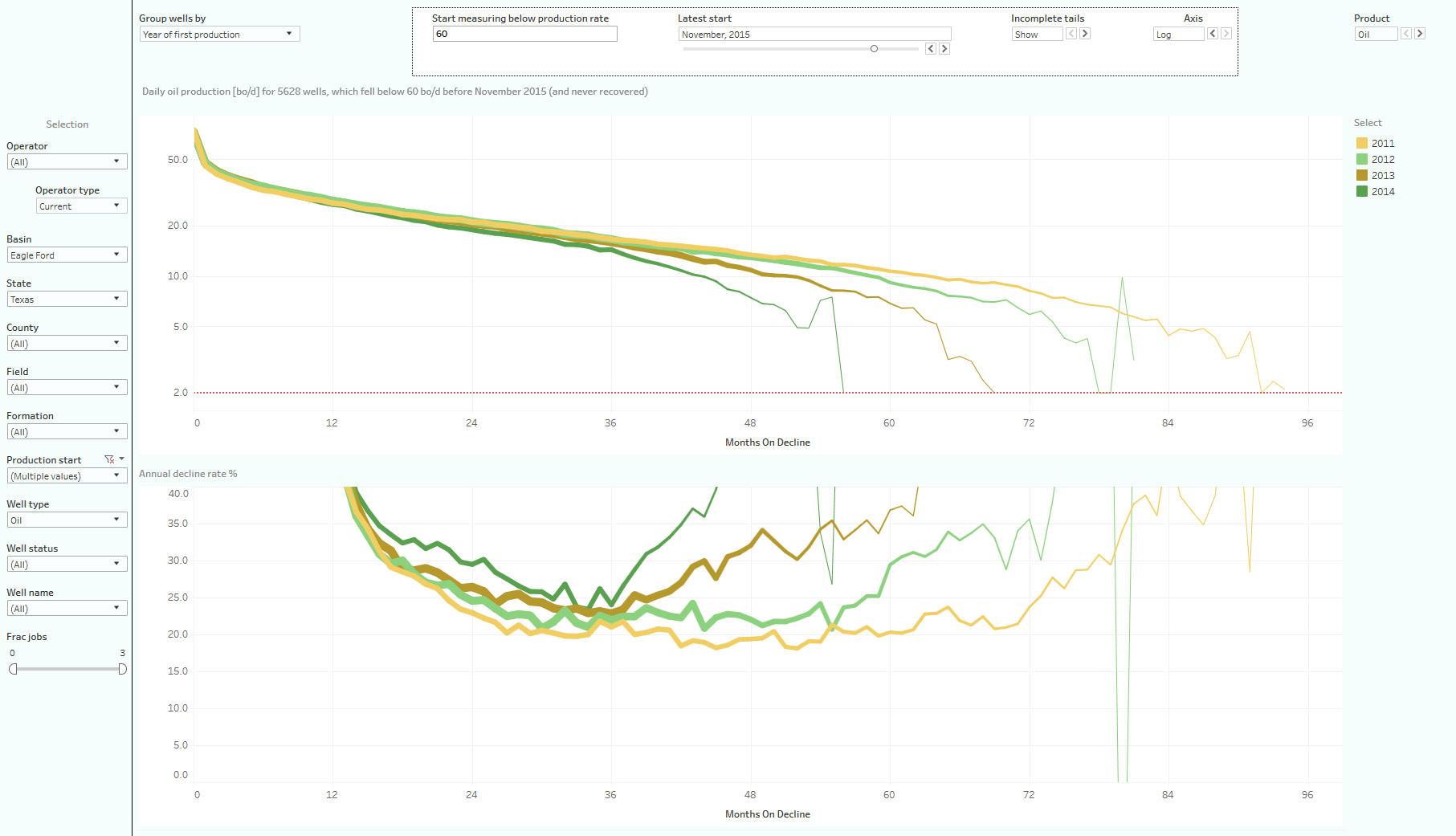 Here the performance is shown of all the horizontal wells in the Eagle Ford, that started production between 2011 and 2014. Only wells are selected that have produced predominantly oil, and which fell below a production rate of 60 bo/d not later than Nov 2015 (this ensures that we have at least 36 months of data for all wells), from which they never recovered.

There were 5,628 such wells, from in total 11,554 horizontal oil wells that started in the Eagle Ford in those 4 years.

The top chart shows the oil production rate (logarithmic scale) of these wells, by the month since they fell below 60 bo/d. The wells are grouped by the year in which they started.

The bottom chart shows the average annual decline of all these wells. Three observations:

A special thank you to Mike Shellman for sharing a wealth of articles and oilfield knowledge regarding this topic.

Next week we are at the NAPE summit in Houston, so if you happen to be there, please come visit our booth (#2331). We also still have time available earlier in the week for 1-on-1 meetings in Houston, so please contact us if you’re interested in understanding how we might help you.

Tomorrow at 10:30 (EST) we’ll also cover the Eagle Ford in our enelyst chat. Later this week, or early next week, there will be a new update on the Permian Basin.

Visit our blog to read the full post and use the interactive dashboards to gain more insight http://bit.ly/2MMYWh2