A Dutch court ordered a Nigerian subsidiary of the oil giant, Shell, last week to compensate for the damage caused by oil spills to local farmers on its watch in the oil-rich Niger Delta region, in 2013.

The unprecedented ruling will have server repercussion for the international oil companies, which work in Nigeria – and beyond its borders.

Shell had been denying the allegation that it was responsible for the oil spills that ruined the livelihood of farmers living in the region; instead, it had been blaming it on sabotage.

Of course, sabotage and oil theft are rampant in the region. The Dutch court, however, made the ruling while holding the Nigerian subsidiary responsible for the damage and ordered the compensation; in what form it will take is to be spelt out soon.

The ruling has made the villagers affected by the disaster happy and they will get some form of compensation, much to their delight.

In Nigeria, the state of economy as a whole has been in the doldrums for the past few years in light of falling oil prices. There are no indications that it will see any green shoots in the near future across the vast Nigerian landscape soon, if the status quo does not change in an irreversible way. 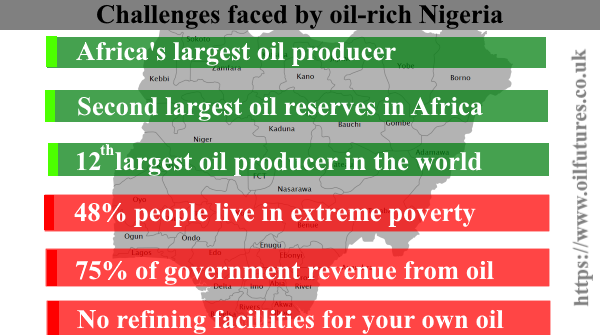 Since 75% of Nigeria’s government revenue comes from oil, the authorities have to walk a tight rope in addressing other pressing issues like infrastructure projects, health and education.

In addition, the growing insurgency of Boko Haram and military’s inability to contain its influence hardly provide incentives to the potential investors; kidnapping and hostage-taking in remote region are endemic; a series of kidnappings involving school children in recent months elevated the worrying trend to a new level.

Nigeria’s lack of oil refinery facilities, meanwhile, make Nigeria’s woes even more complicated; it, perhaps, stems from the investor fatigue due to lawlessness in the oil-rich regions and of course, poor governance in many layers of both regional administrations and that of the federal bodies: as a result, it has to send out crude oil to foreign countries for refining and then import back, which amounts to 70% to 80% of the national needs, from lands as far away as the US and Switzerland!

On a positive note, private companies have begun building their oil refinery facilities to address the critical need in recent years. The hurdles that they have to overcome, however, are mounting, despite the federal government’s determination to make a difference.

Although a central authority controls the oil licences and entry of international players into the oil sector, the lack of transparency and institutional failures have plagued the whole mechanism for decades, with oil money amounted to billions of dollars being not accounted for.

It will take years, if not decades, to address the challenging issues faced by the oil and gas sector – the main lifeline of its economy. Up until it takes meaningful measures to distribute the national oil wealth across the regions which are entitled to lion share, the nation would never be able to breathe a collective sigh of relief while feeling it finally reached where it should be.