These interactive presentations contain the latest oil & gas production data from all 25,309 horizontal wells in the Permian (Texas & New Mexico) that started producing from 2008/2009 onward, through November. 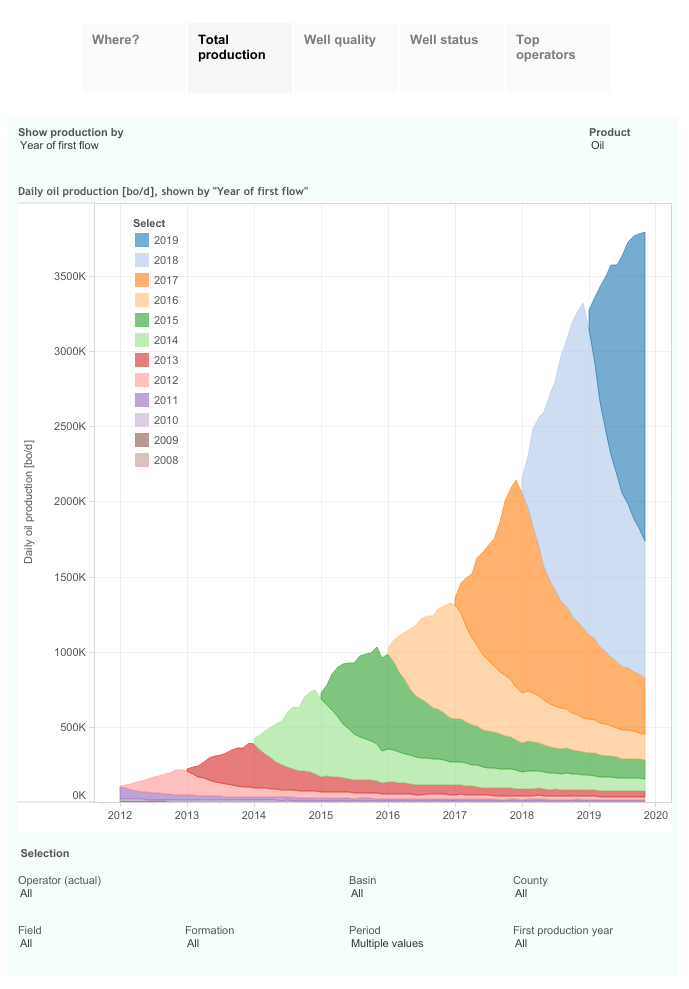 November oil production came in at around 3.9 million bo/d (after upcoming revisions), representing a y-o-y growth of 0.6 million bo/d.

The relative increase in gas production was even higher (toggle “Product” to gas). In fact, the increase in gas output since 2018 was larger than in any other tight basin in the US (even the Marcellus!), as is shown in the following image [taken from our advanced analytics service] 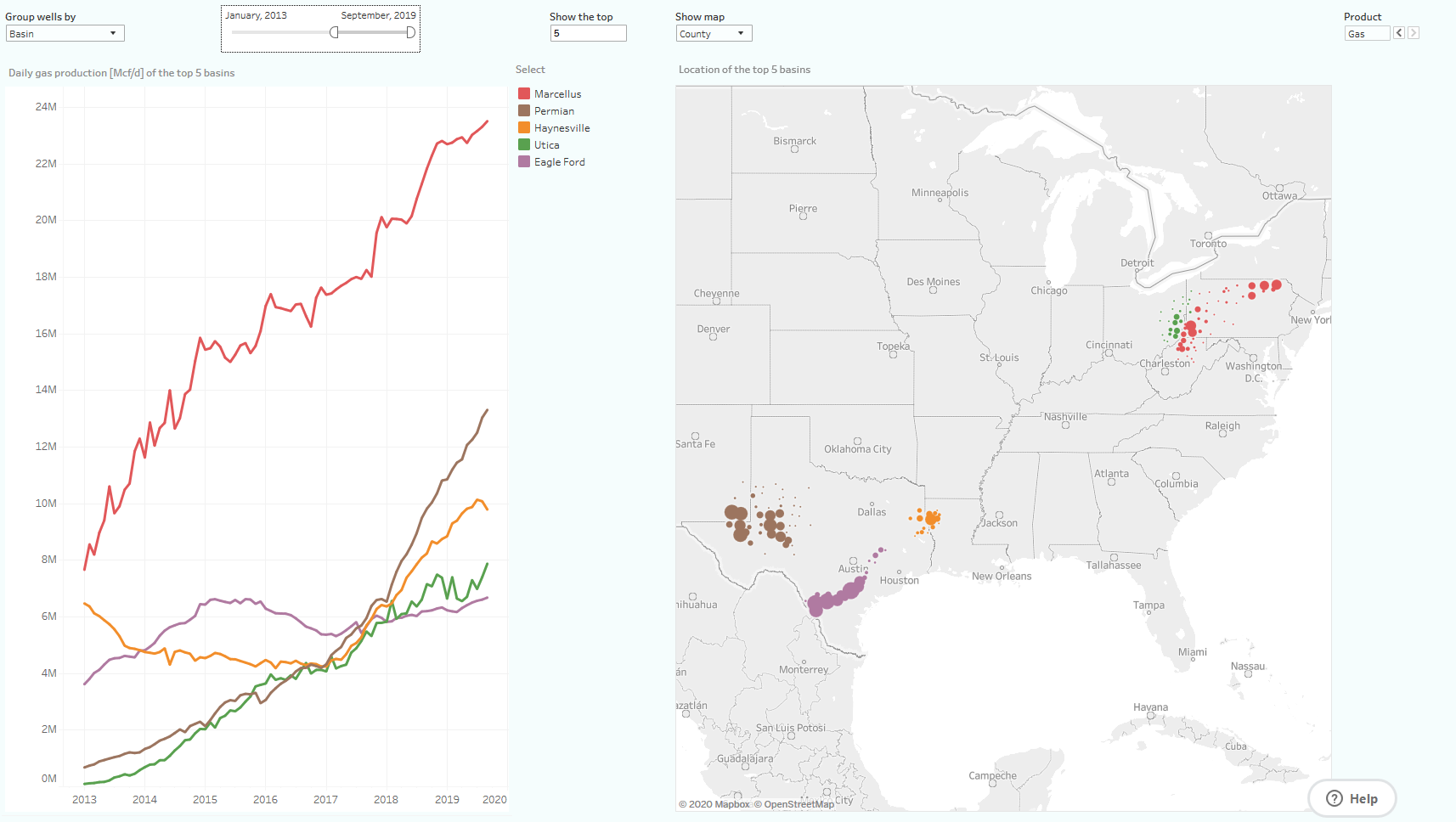 Total gas production in the top 5 US tight basins. Horizontal wells only.

Note that the M (y-axis) stands for millions.

Several customers and reporters have asked us whether we could provide more information on gas flaring. This is currently high on our to-do list and I expect to be able to share the first results next month.

On the well productivity side, the picture is the same as we’ve noted in earlier posts: there are small increases every year since 2016 (“Well quality” tab), but the productivity per lateral foot is unchanged. This is visualized in the following graph, which I also copied from ShaleProfile Analytics: 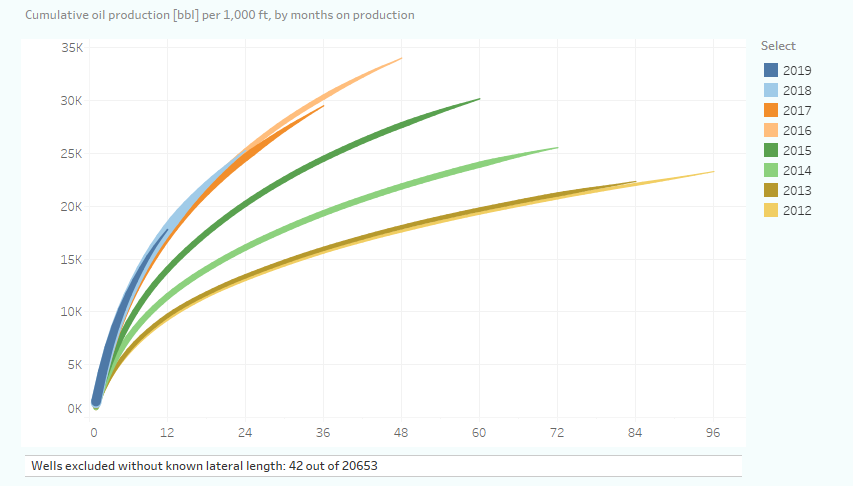 Normalized well productivity in the Permian. Horizontal oil wells only.

Of course, these averages hide the fact that there are areas where well performance improved or declined.

In the final tab (“Top operators”), the total production of the 8 leading operators in the Permian is displayed, including their well positions. 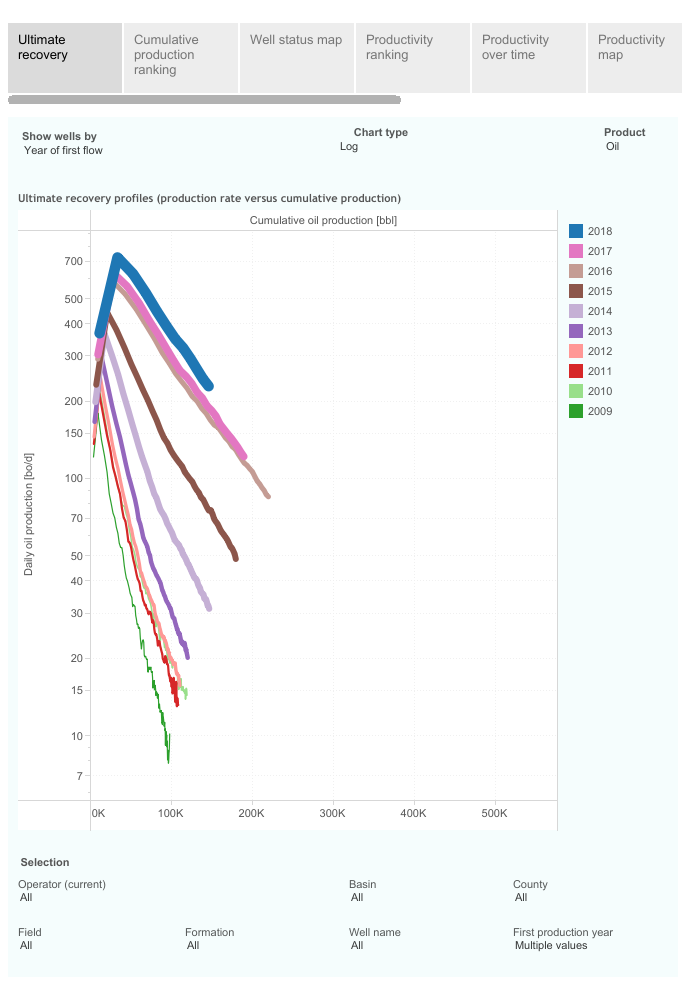 The 2,261 horizontal wells that began production in 2016 (displayed in light-brown) recovered 220 thousand barrels of oil during the first 3 years on production, on average. By that time they were still producing 85 bo/d, down from a peak rate of 590 bo/d.

Early next week, we will have a new post on the Eagle Ford.

Visit our blog to read the full post and use the interactive dashboards to gain more insight: https://bit.ly/2TdLrL5