These interactive presentations contain the latest oil & gas production data from 11,444 horizontal wells in Oklahoma, through December 2019. This is our first post on Oklahoma and maybe also the last one, as it will be part of the bigger US updates from now. Oklahoma is home to several tight oil & gas basins, such as the SCOOP and the STACK. Production data is not easily provided by the state agencies. Multiple sources and thorough cleansing is needed before the data can be used. I think we did a pretty good job with that so far and we still have ideas for more improvements. 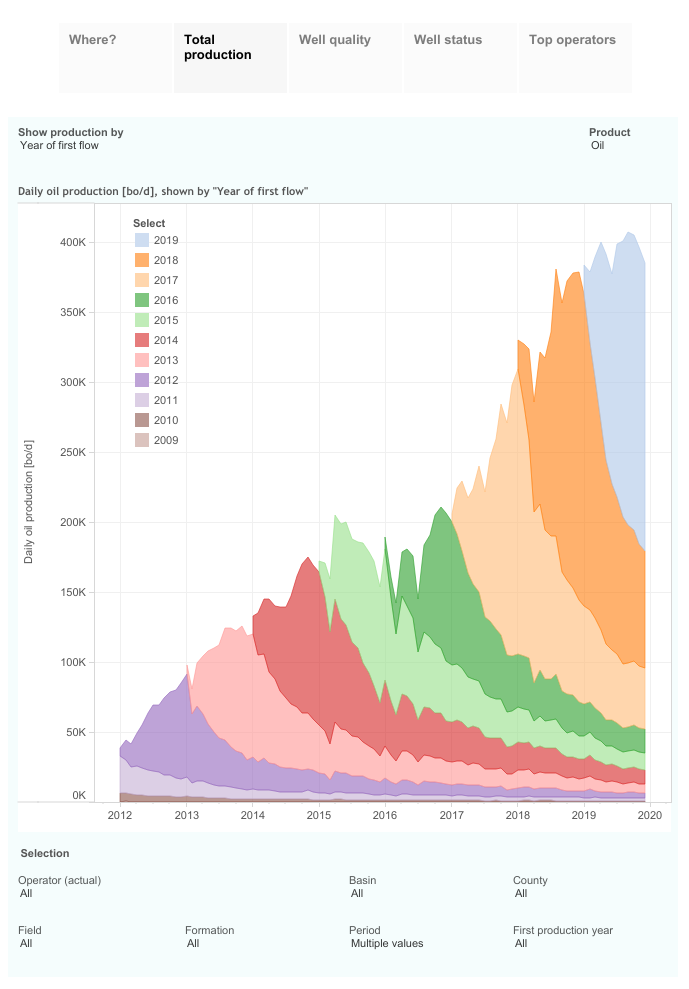 Oil production from horizontal wells ended last year at just below 400 thousand bo/d, a few percent higher than a year earlier. Natural gas production came in just over 5 Bcf/d, also slightly up y-o-y.  A significant amount of NGLs are produced as well, but these are not reported by our data sources.

You may sometimes notice some spikes up and down in the production data. These are data issues that are still left, after the many corrections that have already been applied.

The state has been hit very hard by the recent crisis and the horizontal rig count is at the lowest point in over a decade. Last week, only 20 rigs were active, down 86% from the 144 rigs that were operating in November 2018 (and 200 rigs at the end of 2014).

Based on the current rig count, our long-term projection shows that the state would only be able to sustain an output of about 1/3rd of the December level. You can see this in our publicly available Supply Projection dashboard, if you select only this state.

Well productivity in Oklahoma has steadily grown over the years (“Well quality” tab). These production results are however quite far behind compared with the other tight basins. For example, the 1,333 horizontal wells that came online in 2017 are on track to produce 80 thousand barrels and 0.84 Bcf of natural gas in their first 3 years, on average. This compares poorly with the Eagle Ford, where the wells that began in the same year will produce twice the amount of oil and the same volume of gas over that time frame. I am sure that there are many reasons why this comparison is too simple, but it probably does explain at least partially why interest has fallen dramatically, even before the latest rout.

Ovintiv (formerly known as Encana, which acquired Newfield 2 years ago) and Continental Resources are the largest oil & gas producers, as you can see in the final tab (“Top operators”).

These 2 operators also have the most productive wells in the state, as measured by the cumulative oil recovered in the first 2 years. The full ranking of all operators with at least 50 operated horizontal wells is displayed in this screenshot, taken from ShaleProfile Analytics:

Productivity ranking in Oklahoma, based on the average 2 years oil recovery. Hz wells only.

The map shows all the wells that were included and they are colored by the same metric. 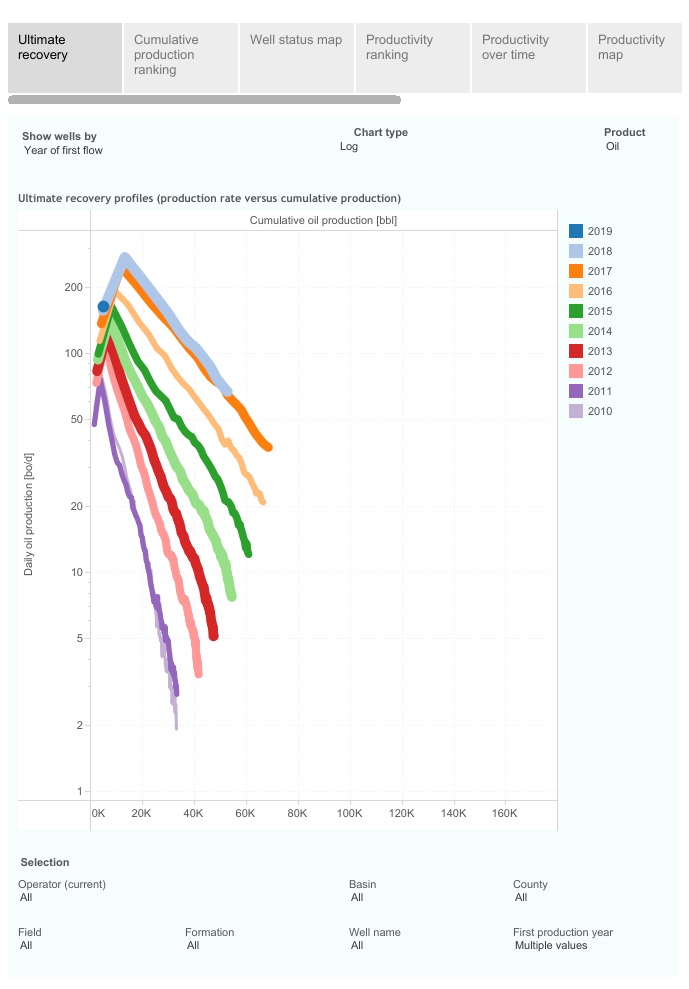 Water production data is unfortunately not available from the sources that we use.

Early next week we will have a new post on all covered states in the US, followed by an update on North Dakota which will release March production data in the coming days.

For these presentations, we used data gathered from the sources listed below.

Visit our blog to read the full post and use the interactive dashboards to gain more insight: https://bit.ly/2Sjm0rt