These interactive presentations contain the latest oil & gas production data from all 26,826 horizontal wells in the Permian (Texas & New Mexico) that started producing from 2008/2009 onward, through February. 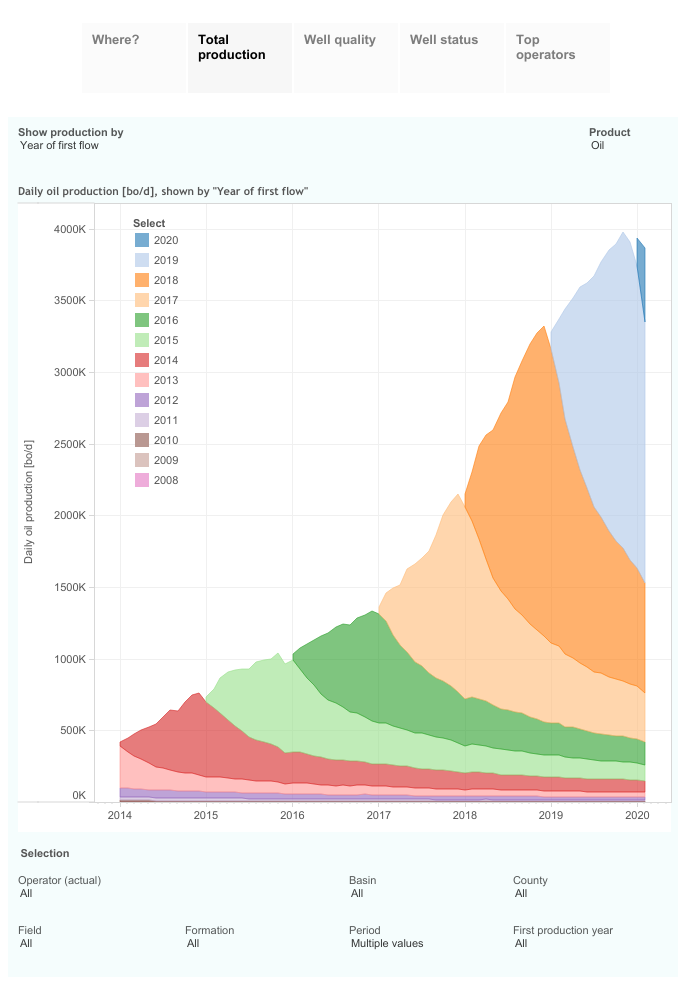 Oil production from horizontal wells has hovered around 4 million bo/d (after upcoming revisions) in the Permian, since November. Natural gas production has now edged above 14 Bcf/d, double the output of two years ago.

When we wrote our previous post on the Permian last month, there were 274 rigs drilling horizontal wells, according to the Baker Hughes rig count. Last week, the number had fallen by just over 100 to 173 rigs. As our Supply projection dashboard, reveals, such a level of drilling activity, if sustained, would only be able to support a long-term production output of 3 million bo/d. Nonetheless, the decline in activity was even sharper in the other tight oil basins and currently 78% of the horizontal wells in these basins are here (compared with 72% a year ago).

In the “well quality tab” the production profiles for all the wells in the Permian are available. The bottom chart allows you to see that well productivity has increased each year in the last decade. This does not consider that laterals have gotten longer and more proppants are used in modern completions.

In the final overview, you will find the production history of the 15 largest oil producers in the Permian, as well as their well locations. Occidental took the lead last year after it acquired Anadarko. The other 3 operators in the top-4 (Pioneer, Concho and EOG) were all at around 280 thousand bo/d in February. Strikingly, all 15 significantly increased output in the past 2 years. 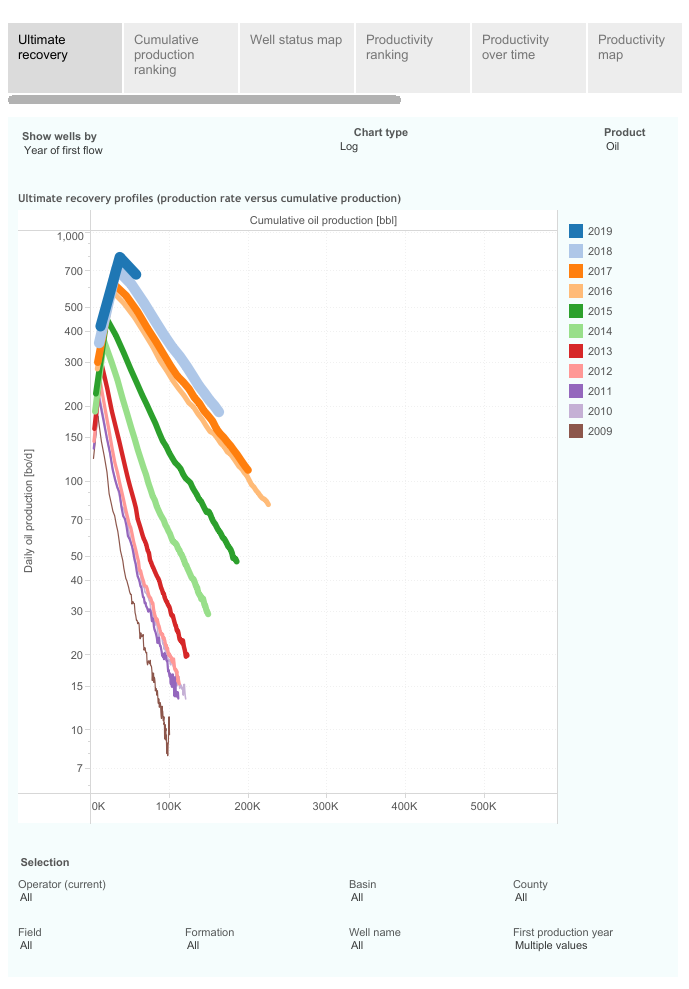 Almost 2 weeks ago, our friends at Wildcax released this in-depth report on Ring Energy, a Permian-only player: Ring Energy, Inc.: An RBL Case Study, for which they have used our analytics service. We agree with their assessment that it appears that actual well results are quite a bit behind the type curves used by this operator. In this screenshot from ShaleProfile Analytics (Professional), you can see the performance and location of all the 179 horizontal wells that it brought online outside the Delaware Basin (in which it completed 4 wells) between 2016 and 2019: 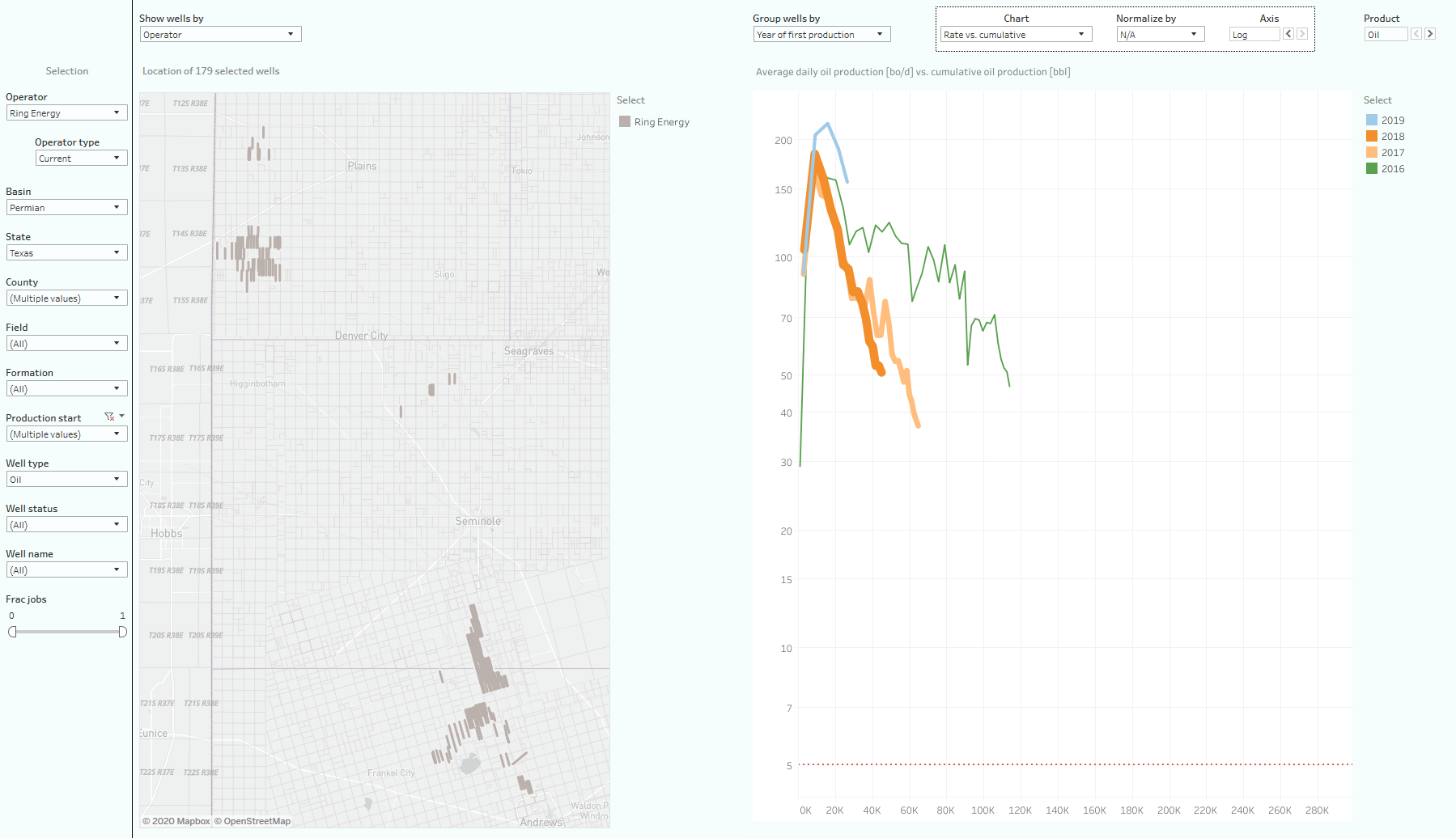 Although the 8 wells that it completed in 2016 are on a slightly higher trajectory, the later wells displayed here are on a path to recover less than 100 thousand barrels of oil, before they have declined to a production rate of 20 bo/d, on average. In contrast, Ring Energy used type curves with EURs well above 300 thousand barrels of oil equivalent (almost all oil).

More recent data is available in our subscription services (85% of the wells in Texas have already March production data). We will have a new post on the Eagle Ford later this week.

Visit our blog to read the full post and use the interactive dashboards to gain more insight: https://bit.ly/3g34NwQ

As part of our COVID-19 response, we’re offering free access to ShaleProfile Analytics to people whose livelihoods are affected by the downturn: https://shaleprofile.com/shaleprofile-offer/