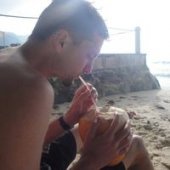 I screwed up, bought CL but now steep contango, what happens before expiry?