These interactive presentations contain the latest oil & gas production data from all 27,209 horizontal wells in the Permian (Texas & New Mexico) that started producing from 2008/2009 onward, through March. 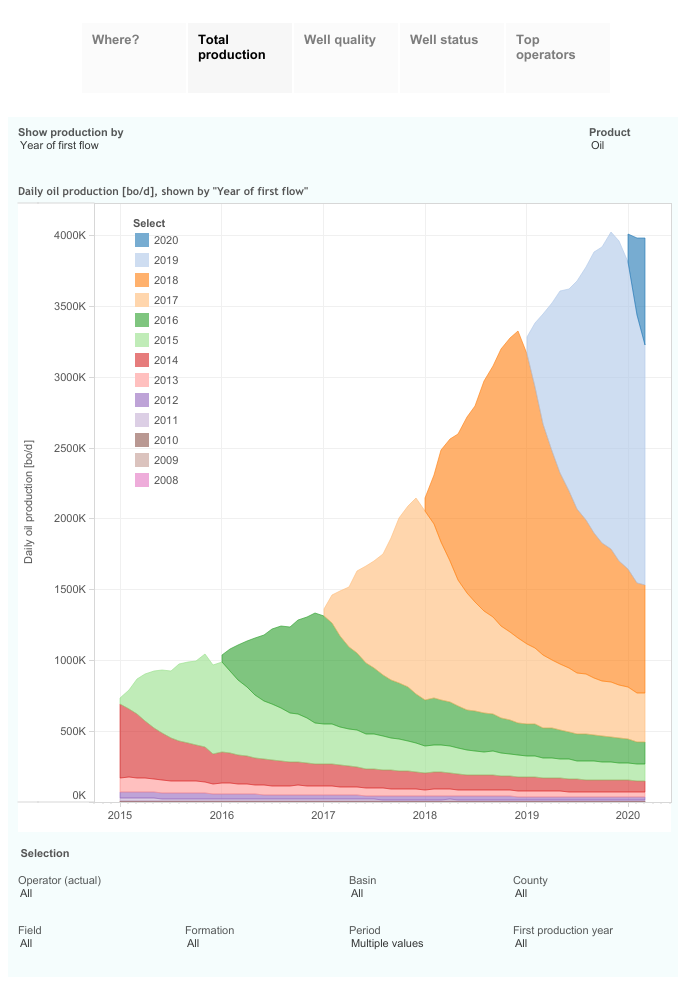 In March, about 4.1 million bo/d was produced from horizontal wells in the Permian (after upcoming revisions). The impact of the low prices only started to become visible in the following month, although, based on preliminary data (available in our subscription services), the drop appears to have been less than e.g. in North Dakota.

But the horizontal rig count has fallen by 2/3rds since the start of this year, to just 131 rigs last week, according to Baker Hughes. At this level, and assuming no changes in rig & well productivity, the output would fall some time next year to below 3 million bo/d, as you can find in our Supply projection dashboard, after selecting this basin: 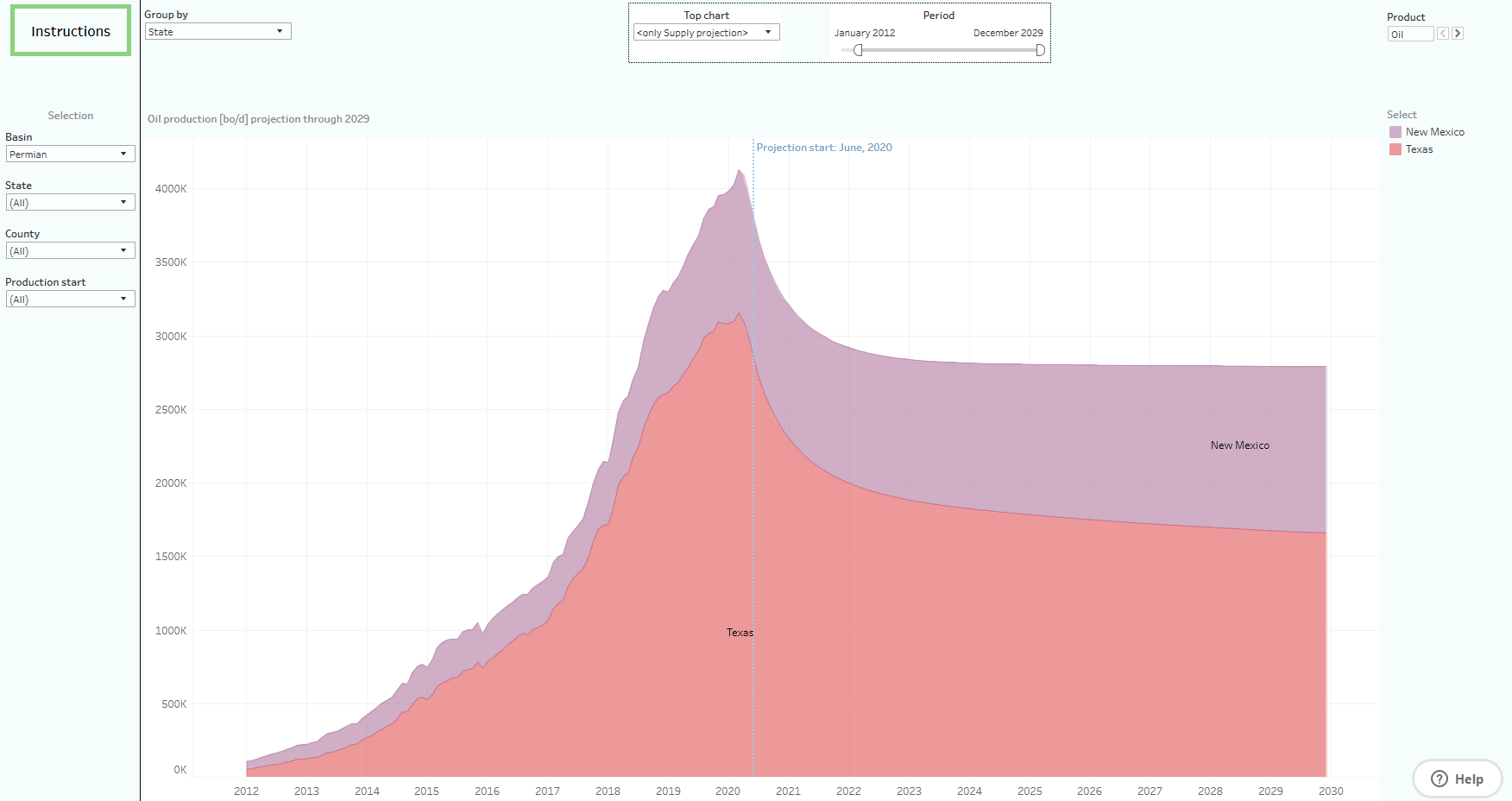 Surprisingly, as is visible in the graph above, output would still grow in the New Mexico part of the basin, as the rig count has declined less severely there.

In the “well quality tab” the production profiles for all these wells are displayed. Well productivity has steadily increased over the years, due to improvements in drilling & completion technology (esp. longer laterals and more proppants). Horizontal wells that began production in the past 2 years are on track to recover almost 250 thousand barrels of oil in the first 3 years on production, on average.

In the final tab the production and locations are shown for the 20 largest oil producers in the Permian. As you can see, several operators set new output records in March, such as Concho Resources and Exxon Mobil. Occidental took the lead last year after it acquired Anadarko. The other 3 operators in the top-4 (Pioneer, Concho and EOG) were all at around 280 thousand bo/d in February. Strikingly, all 15 significantly increased output in the past 2 years. 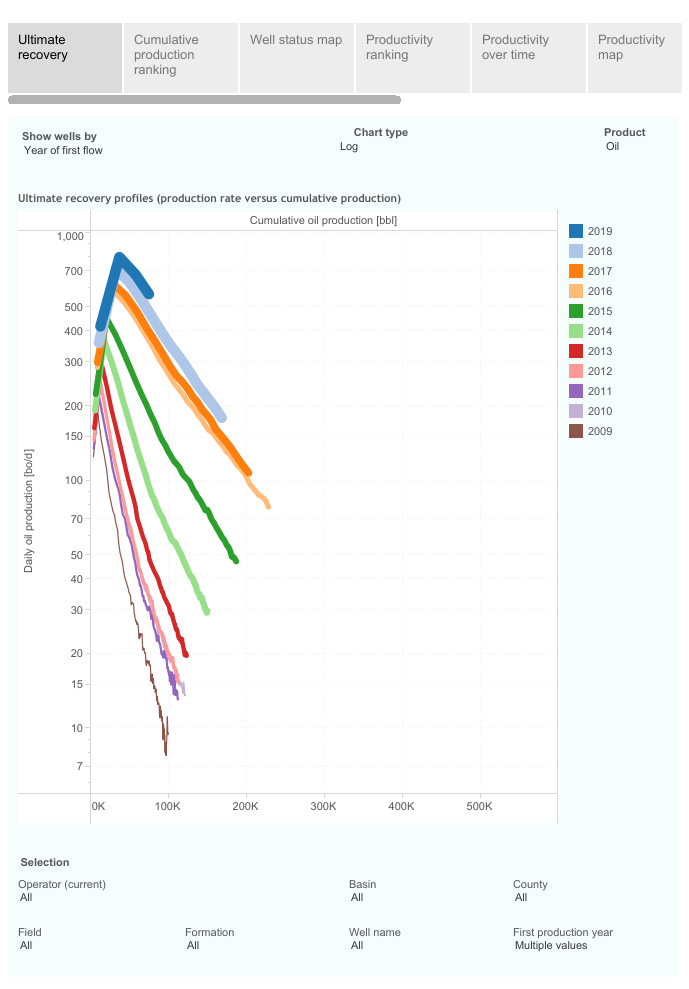 Which operators have the best performing wells in the Permian? The Productivity Ranking dashboard within our analytics service can easily answer this question: 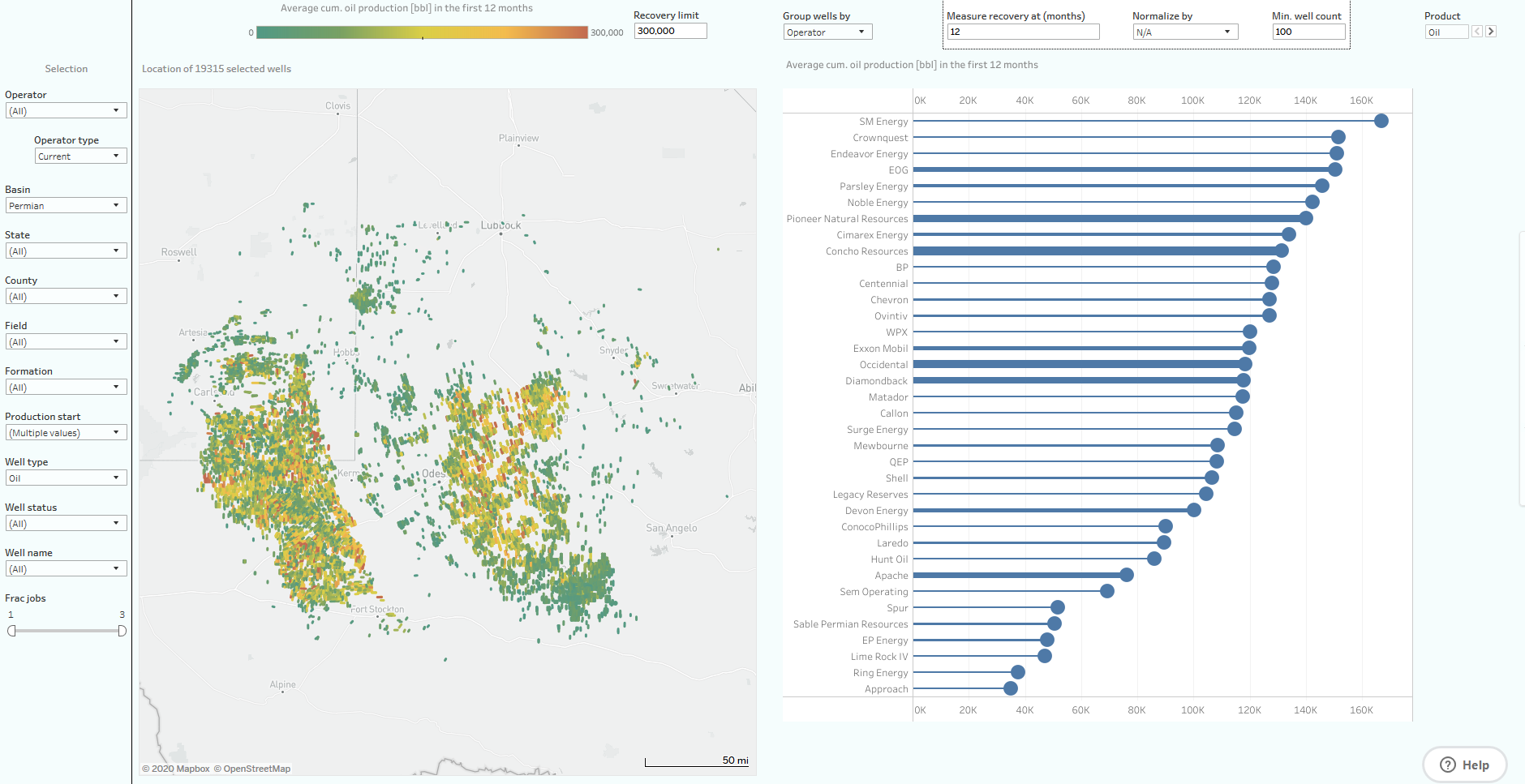 Operator ranking based on average oil recovered in the first year. Horizontal oil wells only.

On the right side you can see this ranking, with only the operators selected that operate at least 100 horizontal wells. SM Energy is in the lead, as the 234 wells that it brought online since 2012 (and have operated at least for a year) recovered over 160 thousand barrels of oil in the first year, on average. Ring Energy, which we discussed in our previous post, is near the bottom. On the map you will find all the selected wells, colored by this same metric (red is better).

More recent data is available in our subscription services (90%+ of the wells in the Permian already have April production data). We will have a new post on the Eagle Ford early next week.

Visit our blog to read the full post and use the interactive dashboards to gain more insight: https://bit.ly/3dwih1M