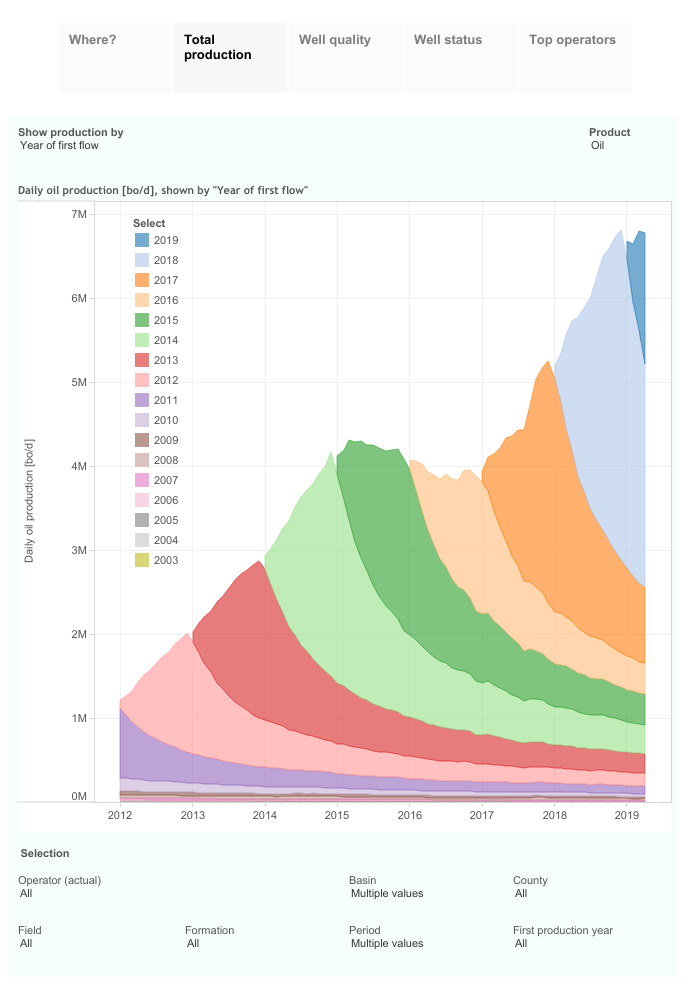 These interactive presentations contain the latest oil & gas production data from 112,550 horizontal wells in 12 US states, through April 2019. Cumulative oil and gas production from these wells reached 11.3 billion bbl and 129.5 million Tcf. West Virginia and Ohio are deselected in most dashboards, as they have a greater reporting lag. Oklahoma is for now only available in our subscription services.

In the comments section at the bottom of this post, I will comment on some recent articles that questioned whether well productivity is stalling in the Permian.

Oil production from horizontal wells in these states grew to close to 7 million bo/d in April (after upcoming revisions), setting a new record. That would represent a y-o-y growth of 1.3 million bo/d, but the rate at which production is increasing has slowed down since the end of last year.

In the “Well quality” tab, the production profiles of all the horizontal wells in the major tight oil basins are selected. After many years of major improvements in well productivity, there appears to be a slow-down in the last 2 years. Still, the wells that began production last year are on track to recover 132 thousand barrels of oil in the first year on production, on average, which is 9 thousand barrels of oil more than the 2017 vintage.

The final tab lists the top 5 operators in these tight basins. EOG is still comfortably in the lead with over 600,000 bo/d of production in April.

The “Advanced Insights” presentation is displayed below:

Also here you can see that well productivity increased significantly over the years, and is still going up, although the rate of growth is going down. But what if you normalize for the lateral length, which has increased in almost all of the basins?

The following screenshot shows what that looks like. It was created in our ShaleProfile Analytics service (Professional), which is available for just $279/month. 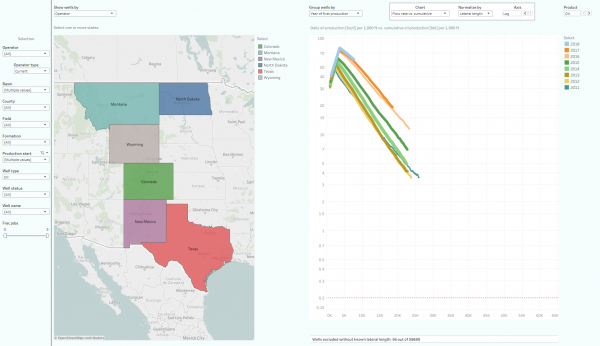 Here you can also find these “Ultimate recovery profiles”, with almost 60,000 horizontal oil wells selected in all the major tight oil basins. It reveals that based on this normalized metric and depending on exactly where and how you measure, well performance barely increased in the 2016-2018 time frame. Here below in the comments section we will do a similar exercise for the Permian.

Early next week we will have a new post on North Dakota, which will soon release June production data.